Agriculture- a lucrative industry in Leguan, Wakenaam -AI programme to be implemented shortly as part of gov’t diversification thrust

(Ministry of Agriculture, August 18, 2016) – As part of Government’s quest to diversify its agricultural production, Agriculture Minister, Noel Holder, on Wednesday, spearheaded an outreach exercise to the islands of Leguan and Wakenaam, Region Three.

The exercise forms part of the Ministry of Agriculture’s mandate to better serve its farmers; by adequately addressing some of the ills affecting their mode of production and by promoting the cultivation and production of non-traditional crops.

Minister Holder, Permanent Secretary of teh Ministry of Agriculture George Jervis, GLDA CEO and NAREI CEO and other officials while speaking to a farmer during the outreach

Guyana’s efforts to expand and diversify the agriculture sector are a policy direction that has gained the attention and support of Government.

“The government’s thrust for development in the agricultural sector over the next five years is hinged on the drive to diversify and expand production in non-traditional activities….Our focus is centered not only on improving the drainage system and rationalising production on the coast, but also in developing these new areas of activity,” Minister Holder explained.

The subject Minister was at the time addressing scores of rice, cattle, coconut and cash crop farmers in Leguan where he echoed the call for not only togetherness, but for farmers to work collectively, to push for the sector to further advance. 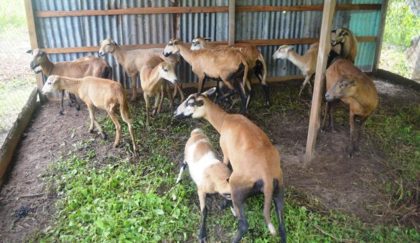 “This pursuit by the Government to modernise the agricultural diversification thrust in our country has already begun to produce favourable results,” the Minister said.

Dabie Singh, a farmer of Leguan during a tour to his farm showcased a thriving industry where he currently runs a successful farm with production of ducks, turkey, sheep and hassar.

“We are running a successful model farm here…people sometimes hear about Leguan and think that we are small disorganised farmers but, indeed, we have come a far way and we intend to continue to boost our production with the help of the Guyana Livestock Development Authority,” Dabie said.

Extension officers of the Guyana Livestock Development Authority (GLDA) have been working tirelessly to ensure that farmers receive the necessary technical advice so they can engage in proper animal husbandry. 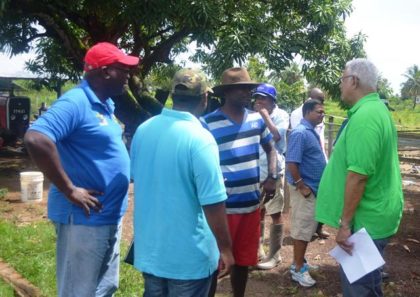 The farmer in his drive to further diversify recently joined the National Agricultural Research and Extension Institute’s quest for large scale coconut production.  Coconut water and copra are at present on high demand in the export market and farmers are now positioning themselves to tap into this lucrative industry.

The Ministry of Agriculture has maintained its commitment to ensuring that export continues to thrive and as such, stakeholders in the agricultural sector continue to receive assistance from the administration, to boost their efforts to diversify the sector by exploring new and modern technology.

At Wakenaam, Mr. and Mrs. Amos Gordon, retirees, currently run a modern duck hatchery which supplies the island, as well as the coast with duck meat and eggs.

“We started very small and, as you can see, we have expanded where we supply the coast also….anyone can benefit from such means of production, you just have to want to succeed,” Mrs. Gordon said.

Chief Executive Officer, GLDA Nigel Cumberbatch has committed to having an Artificial Insemination programme implemented on the island.

The farmers lauded the move by the Ministry in ensuring they can safeguard their livelihood by expanding the dairy industry.

One of the duck hatcheries owned by Mr. and Mrs. Gordon

A team from GLDA is scheduled to commence work with farmers and other key stakeholders shortly, in looking at ways in which Government can boost the cattle industry in the islands.

“We have huge potential on this island, we just have to tap into it. Working together we can further develop the cattle industry,” Cumberbatch said.

Government has recognised the potential for other crops, livestock and aquaculture in the development of the country and as such, has been channelling a substantial amount of resources to provide the necessary infrastructural, technical assistance and training to equip farmers with the necessary skills to explore, and venture into,  new opportunities in the agricultural sector. 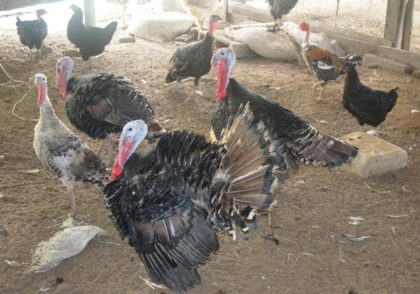