The Ministry of Legal Affairs will examine the revision of the powers of the Judicial Service Commission (JSC) with regard the appointment of Registrars of the Deeds Registry.

“I think that that is something we have to move for quickly to remove that from the law,” Minister of Legal Affairs and Attorney General (AG) Basil Williams said at a press conference today, in his Chambers to address the appointment of Zana Frank as Deputy Registrar of the Deeds and Commercial Registry. 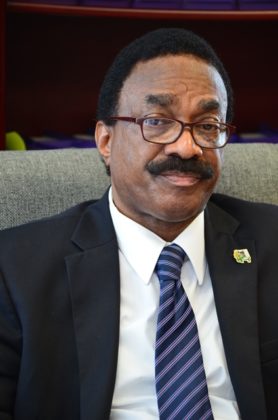 AG Williams explained that the JSC’s appointment powers were an anomaly that was introduced by the previous administration. However, the AG noted that the 1996 and 1980s constitutions do not make these provisions.

“There was this struggle with the Chancellor and the Registrar at the time…as to who had the line control of the Deeds Registry and the Supreme Courts Registry also,” the Attorney General explained.

The appointment of Frank as Deputy Registrar by the JSC was out of jurisdiction AG Williams contends. “The JSC was acting excessively and out of their jurisdiction,” Williams pointed out.

The JSC had appointed Frank as the Deputy Registrar without the consultation of the Attorney General who has the authority to substantively appoint registrars and other staff.

Frank, the AG pointed out, is under qualified for the position. Moreover, her appointment by the JSC violated the advertised requirements for the position. The advertised position required an attorney-at-law with three years or more experience in private law or three or more years in the Deeds, Commercial or Supreme Court Registry.

“Ms Frank obviously is being used as a pawn in an attempt to disrupt the smooth functioning and effectiveness of the Deeds and Commercial Registry authority which I had set in train as Attorney General,” Williams said.

The AG noted that his administration had inherited a Registry that was “in total disarray” with “low morale” among staff, but the office of the AG has since restored confidence in the registries.

“What we did at the level of the Board or Authority, we had the senior staff attend (meetings) and several decisions were taken about the promotions, etc,” Williams explained.