At the opening of the historic meeting being held at the Arthur Chung Convention Centre (ACCC), Commissioner for Infrastructure and Energy at the African Union Commission, Dr Amani Abou-Zeid, invited the Secretary-General of the Caribbean Community (CARICOM), Ambassador Irwin LaRocque, to discuss connecting the Caribbean and the African continent.

Dr Abou-Zied noted Africa’s population is expected to double to 2.5B people by 2020 and the African diaspora is estimated at more than 150M with 23M in the Caribbean alone. While the discussion on this connectivity has begun, Dr. Abou-Zied noted follow-up is needed.

“Aviation provides a critical infrastructure link for the promotion of tourism between the Caribbean and the continent and for linking the people of the Caribbean to the motherland,” Dr Abou-Zied said. 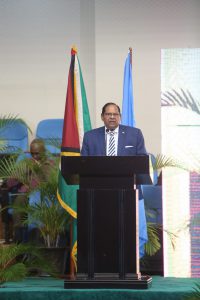 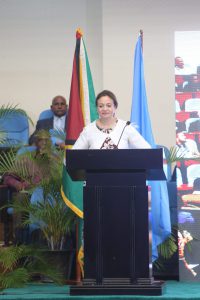 Commissioner for Infrastructure and Energy of the African Union Commission, Dr. Amani Abou-Zied 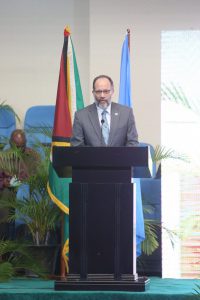 Ambassador LaRocque highlighted air connectivity as critical for economic growth and development, especially for small island states. He added there is a vast opportunity for Caribbean states in creating air linkages with Africa.

“In essence, it provides the required regulatory framework within which a CARICOM air carrier can provide air transport services between member states which are parties to the agreement,” Ambassador LaRocque explained.

Guyana was among the first signatory to MASA. Prime Minister Moses Nagamootoo noted the need to remove traditional restrictions to improve connectivity and access to international destinations.

“Guyana and the rest of the Caribbean look forward with renewed confidence at the expansion of links with non-traditional markets, such as with the African Union. Africa and the Caribbean are joined by the Atlantic crossing; and by history, and culture. It is long overdue that we should have air transport connectivity.”

The ICAO air transport meeting is being held under the theme “Promoting Connectivity for Sustainable Air Transport Development”. The meeting concludes on November 23.