Minister within the Finance Ministry Jaipaul Sharma told the National Assembly today that Budget 2019 caters for all strata of society, from businesses to lower-income workers and pensioners.

The junior Finance Minister also clarified that Budget 2019 is projected to bring in increased tax revenues of 12 percent due to reforms and not from new taxes. With regard to value-added and excise taxes, the minister said that as more oil and gas subsidiary companies get on board, more taxes will be accrued. 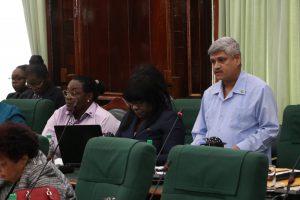 He explained that some of the claims put forth by Opposition MP Irfan Ali about expected increases were not for commodities such as food, clothing and items, and his interpretation of the figures was nothing more than “sweet lies”.

The minister refuted a false claim made about the government spending more on dietary allocations than infrastructure. “In the 2015 to 2019 budget, the allocation (on infrastructure) is $41.1Billion, more than double what the previous administration spent from 2010 to 2014, of $19.2Billion.” This amount, Minister Sharma noted, was 78 percent more than what was spent on dietary allocations which were $23.1Billion. This consisted of meals provided for students in dormitories, the school feeding programmes, hot meals for hinterland students, hospital patients and joint services members.

He also made mention of the fact that unlike the PPP/C’s methodology, the Coalition Government was equipping regions controlled by the opposition with vehicles and computers since it was committed to serving all, the people.

In closing, Minister Sharma reaffirmed government’s social policy to improve the people’s lives, and that Budget 2019 was on track to do just that: “If you could have a $300.7B budget when there is no oil, you could imagine in 2020 what will happen!”