The Civil Defence Commission (CDC) this morning, opened a three-day workshop on Contingency Planning and Implementation of the Oil Pollution Preparedness Response and Cooperation (OPRC) Convention for key public and private players in the local oil and gas sector.

The workshop aims at providing stakeholders with a detailed understanding of the National Oil Spill Response Contingency Plan and the requirements, policy and procedures for implementation of a national oil spill response.

The event is being held at the Arthur Chung Convention Centre, Liliendaal through a collaborative approach between the International Maritime Organisation (IMO), the United Nations Regional Coordinating Unit for the Caribbean Environment Program (UNEP-CAR/RCU) and the Regional Marine Pollution Emergency, Information and Training Centre Wider Caribbean (RAC/REMPEITC–Caribe).

CDC’s Director General (Ag.) Lieutenant Colonel Kester Craig, said that the CDC aims to create a sustainable disaster risk management system; noting that as Guyana advances towards becoming an oil producing territory, the probability of oil spills increases significantly. He also commended the stakeholders present at the workshop, on their commitment and recognition of the need for collaboration.

“The presence of so many representatives here today from the public sector and the private sector, is a signal that there is not only a recognition of the need to collaborate to ensure we have an effective disaster risk management system but more importantly, it shows that there is already the highest level of commitment from you and your agencies to ensure that the development of this emerging sector is done…to ensure protection of our environment while maintaining a very high standard of production,” he said. 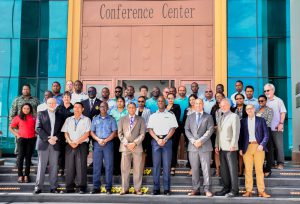 According to the Director of the Department of Energy, Dr. Mark Bynoe, the workshop is a testimony to the efforts being made to build a more robust sectoral framework. He said, “the need was recognised for the design and implementation of a national contingency oil spill plan, though the government continues to emphasise prevention as the key oil spill related activity”.

Dr. Bynoe added that “despite the systematisation of these efforts, accidents do occur and the Co-operative Republic of Guyana has to be prepared for all eventualities, applying as far as practicably possible, a tiered response to mitigate risks.”

Meanwhile, a Consultant from RAC/REMPEITC- Caribe, Lieutenant Commander, Matthew Richards lauded Guyana for its progress in the oil and gas sector. “Guyana has made significant strides in preparation over the last few years. It truly displays your dedication to protecting the environment while undertaking responsible plans for action,” he said.