At a reception held last evening at the Pegasus Hotel Guyana, Prime Minister, Moses Nagamootoo extended his heartfelt gratitude to the outgoing High Commissioner for his efforts over the past five years to further strengthen the bilateral ties between the two nations.

“The Government and people of Guyana wish you a warm farewell and extend heartfelt gratitude to you, Excellency, for your active efforts over the past five years to further strengthen the bilateral bonds between Guyana and India,” he stated. 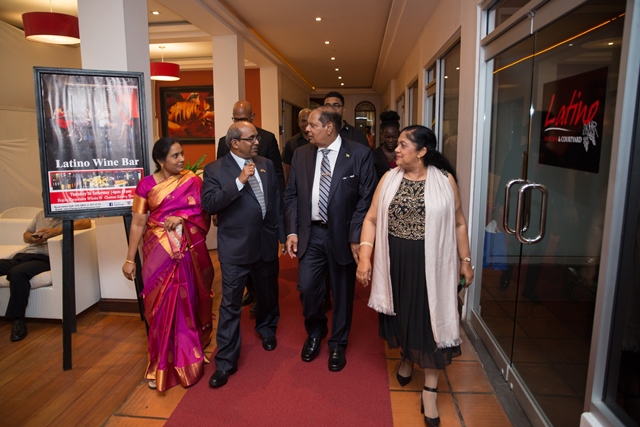 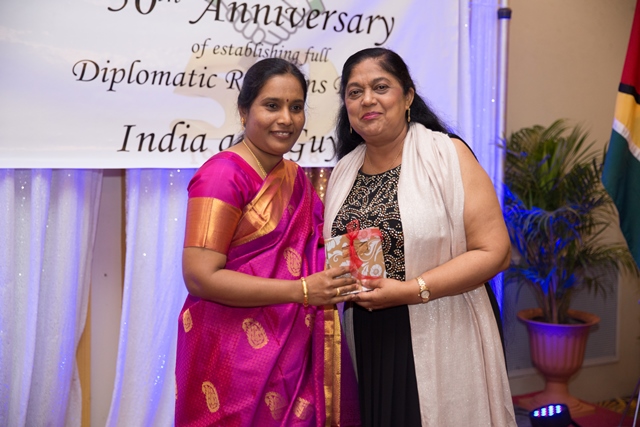 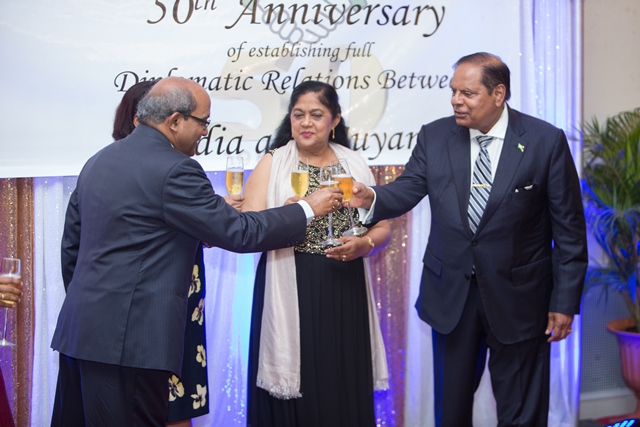 A toast in honour of outgoing High Commissioner of India to Guyana, Venkatachalam Mahalingam. 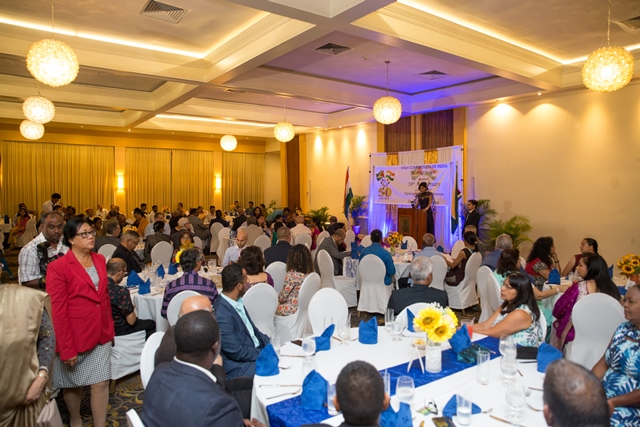 Invitees at a reception held at the Pegasus Hotel Guyana, to celebrate Guyana and India celebrate 50 years of full diplomatic relations.

Prime Minister Nagamootoo highlighted that the number of visits by officials during the last five years to India has borne fruit which resulted in Guyana’s support for India’s candidates to serve on high-level international fora.  On a personal note, the Prime Minister stated:

“I wish to thank Your Excellency for your assistance in arranging those visits, and for facilitating my attendance at three World Tamil Economic Conferences in Southern India.”

The Guyana-India relations are based on the democratic values and common interests as well as the economic and cultural aspirations of the two states and peoples, the Prime Minister explained while noting that these are firmly rooted in the shared history and ancestral ties.

Prime Minister Nagamootoo further explained that both countries continue to hold in high regard, respect for international law and treaties, the principle of non-interference in internal affairs, and together embrace the search for alternative energy to mitigate the growing effects of climate change.

“Looking ahead, Guyana and India have signed memoranda in the field of energy, and our Government has placed collaboration in the area of renewable energy as a priority within the context of Guyana’s Green State Development Strategy [GSDS].”

In conclusion, the Prime Minister wished the High Commissioner on behalf of the government and people of Guyana, “good health, strength, and success in your endeavours ahead.”

Indian High Commissioner to Guyana, Venkatachalam Mahalingam, during his remarks, noted that this is a “bittersweet” moment for him as he departs Guyana for his next posting.

The Indian High Commissioner explained that his tenure lasted for a little more than five years, and it has been “a wonderful and memorable experience.” He indicated that he was able to cultivate great relationships with government and non-governmental officials, and “this is something of which I am very proud”. He also highlighted that during his tenure, he can confidently state that the relationship between India and Guyana has grown and continues to flourish on all platforms.

As he recounted some of the infrastructural works that have been undertaken with Indian assistance, and cooperation projects in technical, educational and cultural areas, notably among these are the IT Centre of Excellence and the Indian Arrival Monument at Palmyra in East Berbice.

“India is committed to climate change, and eradication of terrorism and call on all nations of the world to join in this effort as well,” he remarked. He also noted that over recent years there has been an unprecedented exchange of visits between Guyana and India by official and students.

Guyana and India established diplomatic relations in 1966, and have since built strong bonds, based on the promotion of economic interests and the strengthening of cultural ties.