Civil society must hold governments accountable in the fight against corruption – Min. Greenidge

Minister of Foreign Affairs, Carl Greenidge said he is optimistic that governments will honour the commitments of the Lima Declaration on Democratic Governance against Corruption. 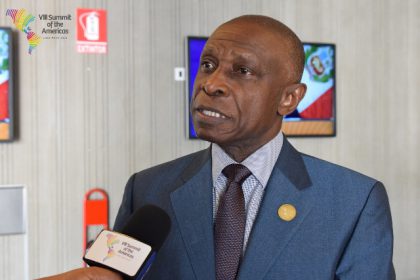 The declaration was signed by all participants at the close of the eight Summit of the Americas in Lima, Peru on April 14. Minister Greenidge was among the heads of state and delegations at the Summit which is hosted by the Organisation of American States (OAS).

“I think civil society, which was a part of this, is not going to let governments escape by doing something contrary. So, I think this is one of the areas in which you will find increasing pressure on governments to live within the principles that are set out here,” Minister Greenidge said.

The Declaration outlines 57 action points aimed at preventing future corruption. “Transparency is a big part of it. There are mechanisms for involving and dialoguing with civil society; there are the mechanism covering a whole range of things,” Minister Greenidge noted.

Civil Society Organisations, indigenous people, youth, the private sector, labour unions and other social actors met at a forum on civil society on April 10-11 in Lima, Peru. The Summit Process noted that civil society and social actors are fundamental to prevent, detect and fight corruption.

In his address to the plenary session at the Summit, Minister Greenidge noted Guyana remains committed to the strengthening of the anti-corruption mechanisms and strategies in keeping with anti-corruption treaties.

This includes partnership at the regional and international level through broad-based cooperation among the judiciary, police, and prosecutorial authorities and financial intelligence unit in the fight against corruption.