The intention of the programme is to raise awareness among students on climate change and its effects, and the role the students can play in helping to save the environment.

Today’s activity saw about 20 students being selected to participate in the interactive session. They were briefed on climate change, its impact and effects through video and other presentations, after which they were quizzed on what they learnt and received prizes for their answers. 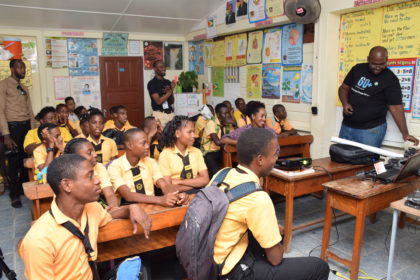 Students of the Sophia Special School participating in the Office of Climate Change’s awareness session at the school at Dennis Street, Sophia

The Sophia Special School is one of 20 schools being targeted, in the first half of 2017.  The awareness programme caters for all levels of educational institutions since the office will adapt techniques to teach the students. For the nursery age students, the format for the awareness sessions will be in the form of a puppet show.

After the targeted number of schools along coast is met, the awareness programme will continue throughout the year targeting other schools.

Climate change refers to a change in the average weather conditions. Government has indicated its commitment to developing a holistic approach towards managing and mitigating its harmful effects.

There is a modified policy that focuses on the development of a green economy. This covers areas beyond just the Low Carbon Development Strategy (LCDS), and includes coastal zone management, rising sea levels, water management, and energy generation.

Government’s vision for a green economy is based on protecting the environment and ensuring that Guyana plays a greater role in mitigating the effects of climate change.