During an appearance on VOG’s ‘INSIGHT’ radio programme, Minister of Public Security, Hon. Khemraj Ramjattan referenced the recent Friendship accident. “It has hurt me very badly and our police force,” he said, adding that measures have been activated, “it will be the efforts of everyone – Public Security, the Police Force and the citizenry out there.” 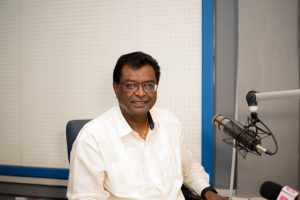 Providing a general overview of the traffic situation, Minister Ramjattan said what is needed is more individual responsibility on the part of both drivers and passengers.

Acknowledging that the government has a role in ensuring there is proper infrastructure such as wider roads and better signage, the minister nonetheless noted that accidents have also occurred in areas where all the necessary infrastructure are in place. These have been attributed, he said, to drivers’ or pedestrians’ recklessness. This can only be stemmed, he noted, by coordinated, “integrated efforts by everybody.” The fact that, annually an average of 11,000 vehicles has been imported for the last decade, and the need for new roads to ease congestion, were also listed as contributing factors.

To avoid accidents, which may not only be fatal but may incapacitate or traumatise person (s) or damage to property, requires both drivers and passengers to say, “You’re doing something wrong. Please stop or please put me out of the vehicle. Our public must help with these things.” Minister Ramjattan remarked.

He noted that several measures have been instituted following the Friendship accident which prompted His Excellency, President David Granger to order an enquiry conducted by Police Commissioner (ag), Nigel Hoppie.

This COI, which he explained “contained several good recommendations”, has been completed and handed over the Head of State.

The minister admitted that while most police ranks are very good drivers, there are a few who tarnish the force with their actions.

While he disclosed that the use of geo-positioning systems to manage police assets is being considered, Minister Ramjattan noted that “we have an individual responsibility” when using the roads. He advised members of the public to speak out if they see any reckless use of the roadways.

He also cautioned police ranks: “Do not use your sirens to become masters of the road!”