Georgetown will soon benefit from a series of drainage works that are expected to increase the drainage capacity and significantly reduce flooding throughout the city.

Officials from the National Drainage and Irrigation Authority (NDIA) on Wednesday (3rd April, 2019) disclosed that contracts have been approved for a series of mechanical and manual cleaning of the city’s drainage channels. Manual cleaning operations totaling GY$71,934,120 and manually cleaning operations totaling $91,652,572, are on schedule to commence within the next two weeks. These works will be executed on the primary drainage systems in Georgetown during 2019.

260m of this 380m stretch of channel in La Penitence that has been excavated to date.

The NDIA will be partnering with the Georgetown Mayor and City Council (M&CC) to carry out rehabilitation, operation and maintenance of the city’s primary drainage system.

”In 2019, NDIA will be responsible for 93,421 meters of main drainage canals in Georgetown, including the Downer/Liliendaal Pump Station Drain, South Road, Ruimveldt North & South among others. An allocation of G$ 274 million will be spent on Georgetown drainage for 2019,” Agriculture Minister Noel Holder said.

Three high capacity mobile drainage pumps will also be installed at Church Street, Sussex Street and Ruimveldt to reduce the occurrence of flooding.

Additionally, the authority will continue to execute maintenance works on other pumps in the capital city, which includes the seven mobile pumps and two fixed drainage pumps at Kitty and Liliendaal.

“We will also be using our equipment to rehabilitate the La Penitence South channel which is 5,600 metres long. These works will be broken up into eight sections since the pontoon has to be demobilized and re-launched around bridges, main access roads and intersections,” Hicks said.

The Deputy CEO further stated that even as major works are expected to commence shortly, squatting activities continue to obstruct works of that nature in areas such as La Penitence.

“The NDIA was able to fabricate a mud bin on the pontoon and mount an excavator to carry out excavation works on the La Penitence South drainage channel. The channel runs from the eastern extreme of the Lamaha Springs area to the westerly extreme draining into the Demerara River via a double door sluice north of Ruimveldt Police Station. A pontoon was launched with an excavator into the channel in the vicinity of Mandela Avenue and the machine is working westerly towards the pedestrian bridge near the   Brickdam Secondary School. To date, 260m of this 380m stretch of channel has been excavated,” Hicks said.

The decision to have NDIA commence drainage works in Georgetown followed the recommendations of a Cabinet Sub-committee meeting which was chaired by the Agriculture Minister and also included Ministers of Public Infrastructure and Communities respectively. 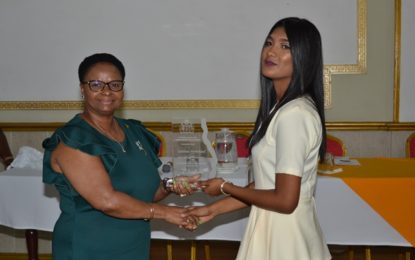