Cuba to increase rice imports from Guyana in 2020

― Al-Imports to increase purchase by 29,000 tonnes

Relations between Guyana and Cuba are expected to grow stronger as the Spanish-speaking country is expected to purchase additional tonnes of rice by January 2020.

Minister of Business, Hon. Haimraj Rajkumar made this disclosure during his visit to Cuba as part as a delegation to the Havana International Fair (FIHAV) 2019. 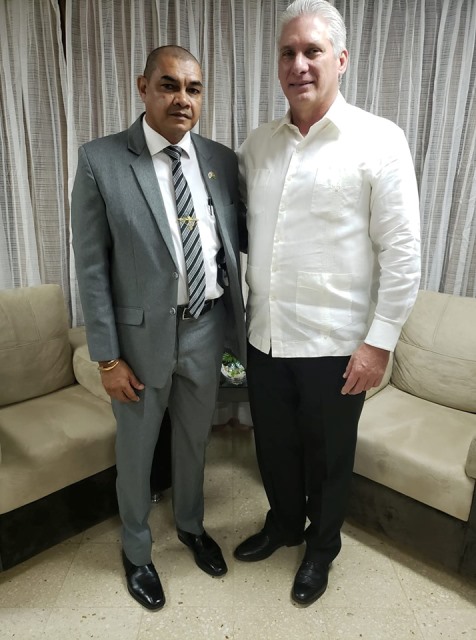 His Excellency, President Miguel Diaz Carnel, President of the Republic of Cuba, and Minister of Business, Hon. Haimraj Rajkumar. 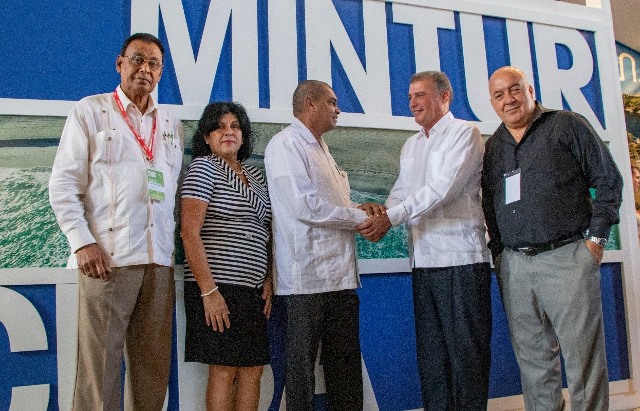 Minister of Business, Hon. Haimraj Rajkumar with first vice Minister of Tourism, Luis Miguel Diaz Sanchez. Also, in the photograph is Guyana’s Ambassador to Guyana, His Excellency, Halim Majeed and Representatives from Cuba.

Business Minister relayed that assurance was given by President of Cuba, His Excellency Miguel Díaz-Canel, during talks between the two.

“His Excellency [President Miguel Díaz-Canel] has indicated his interest in continuing to purchase rice from Guyana. He has disclosed to me an allocation in his 2020 budget has set aside as part of his budget to purchase rice exclusively from Guyana. He is also very interested in our Eco-Tourism in terms of a multi-destination package which will see visitors from Guyana travelling to Cuba and visitors from Cuba travelling to Guyana. I think that it’s a fantastic idea and that the relationship between Guyana and Cuba will even grow stronger,” Minister Rajkumar stated.

More specifically, the Business Minister noted that during a meeting with the company – Al-Imports, it was revealed that they will be increasing their purchase of rice.

“The President of Al-Import has indicated to me that in addition to the amount of rice that they would normally purchase, they will be increasing that amount to 29,000 tonnes by 2020. I am happy that we are getting into the Cuban market, I am sure that our rice farmers in Guyana would benefit from this venture.”

Minister Rajkumar also told the Department of Public Information (DPI) that he had met with representatives of the Cuban Private Sector Commission where both sides expressed an interest in bilateral talks, particularly in the agriculture sector.

During his time in Cuba, Minister Rajkumar also met with the First-Vice Minister of Tourism, Luis Miguel Diaz Sanchez where the two sides held discussions on Eco-Tourism potential.

“During the expo, patrons were very interested in our booth. During that time, we held meetings with South Africa and Kenya, where they were sensitised about Guyana and the goods and services we have to offer,” the minister added.

The Havana International Fair (FIHAV), first founded in 1983, is an annual International Trade festival, and this year comes on the threshold of the celebration of Havana’s 500th anniversary as a town. The five-day fair was held from November 4-8 at the EXPOCUBA Exhibition Site, Havana, Cuba.

FIHAV is the largest international fair for trade and investment in Cuba, represented by delegations from across Latin America and the Caribbean. The event provides an excellent business platform for new companies in the market and those already established.