Culture: A Precious Gift from Our Indian Ancestors Remarks By the Hon. Moses Nagamootoo Prime Minister & First Vice President Of the Cooperative Republic of Guyana Dinner Reception in Commemoration of the 100 years of the end of Indian Indentureship in Guyana At Aagman Restaurant Friday, March 3, 2017

I would like to thank the Indian High Commissioner for his invitation to celebrate the 100th anniversary of the abolition of Indian Indentureship.  In Guyana we are set to have a number of events to celebrate this occasion.

Minister of Social Cohesion is working in partnership with a number of civic organisations, religious bodies and the government to commemorate certain hallmarks that would be associated with Indian Indentureship. 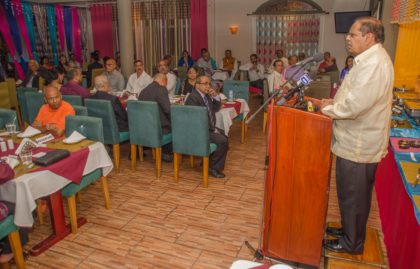 The Indian High Commission has also been involved to focus on this event even under the previous government, I want to single out former Minister Frank Anthony for his advocacy for a Monument to mark the contributions of Indian Indentured labourers in Guyana. We hope, on March 15, that we would be able to unveil a foundation for the erection of the monument, which I understand has been in Guyana for some time. When I was in India last year, I was privileged and honoured to meet the sculptor. I am sure this would be the realization of one of his best pieces of sculpture. The State would also participate in any way it could with social organisations in the grand events in Leonora and also in Berbice.

The abolition of Indian Indentureship is recognised as an important event in Guyana. In fact it reminds us of an end to a period that was characterised by cruel exploitation in the worse form, and bondage on the sugar plantations.

The East Indians that came here as Indentured Labourers made signification contributions towards the foundations for the economic, infrastructural, social, cultural and all round development in Guyana.

A few days ago I was at the Cove and John Ashram, and I commented that one of the precious gifts that Indian Indentured Labourers brought to Guyana was their culture, their spirituality, their religion. And that Hinduism and Islam as well as Christianity contributed to the rich cultural heritage of our country.

Today we are better off, if I may say so, and would be better off, if we follow the precepts of these philosophies and rituals and beliefs that could lead us to become a society that is less divisive, less deformed with corruption and malpractices of one type or the other and with criminality that have seem to have infected even the our schools. We need to be very cognizant of the fact that the past is not simply the past; it can influence our present and can help to mold our future.

I want therefore to thank the Indian High Commissioner once again for this invitation to be with you distinguished Guyanese from all walks of life to celebrate the abolition of Indian Indentureship 100 years ago.