CV Nunes in the spotlight again

CV Nunes Primary School in Anna Regina, Essequibo Coast, has reclaimed its spot as the top performer of Region 2.

Formerly the Anna Regina Primary School, CV Nunes was renamed in honour of former Headmaster and Minister of Education, Cedric Vernon Nunes during the early 2000s. Nunes was credited with the transformation of the education system.

All students of Grade Six Hibiscus secured senior secondary schools in the region.

Venisha Lall, a bubbly 11-year-old, is the only child of her parents. At her school on Friday, students and teachers were elated. The six-graders were saying their customary goodbyes, affixing their signatures on each other’s uniforms. Lall was part of all the excitement – a celebration, she said, after hard work.

“I have been studying for seven years for NGSA. It all began when I was so little” she said. “My schedule was I would wake up at six, go to school at eight, my mom comes to see me at twelve, go to lessons at three. I have a dance class at 06:30, get home at seven, study for an hour and go to bed at eight.”

Despite her “busy schedule”, Venisha’s mom Radikha Lall said her daughter made time to give back to the community. The simple country girl refused her father’s offer to attend a private school.

“She is jolly. She is a happy child. She loves to be part of public arrangements, no private arrangements. She is a dancer, part of the Swarswati Dance Academy, she’s part of the pageantry. And all of these would go towards the community,” the older Lall told DPI.

She said her “princess” has been excelling “all the time”.

The school’s performance at this year’s examination could certainly not have been possible without the input of Deputy Headmistress, Bindawattie Ketwaru. The acting head said she took the Grade Six Hibiscus students under her wings when they were in the fourth grade. The potential she saw was great. “We came back here with our own experiences, and we have decided to work hard to apply what we know, to ensure that this school becomes successful. I felt that it was possible. I was not surprised,” she said of the top spot.

The success of CV Nunes can also be credited to the efforts of the region’s Education Department.

Regional Education Officer (ReDO), Nicola Matthews said the school was the hub of the Ministry of Education’s gifted programme, which targeted students with special academic abilities. CV Nunes has four students in the programme, who all placed in the region’s top ten.

Kenisha Walcott, a resident of Region 2.

Kamalawattie Rameshfondly known as ‘Aunty Mudo’ who has been selling in front of the CV Nunes Primary School for over two decades.

Omkar Singh, a resident from Region 2.

Ivy Sealey, a resident of Region 2.

“I believe that once we continue to work together, officers together with the parents and teachers, we will continue to be on top of things.  We are looking forward to such performance continuously in this region.”

The excitement has spilt over in the community.  Kamalawattie Ramesh fondly known as ‘Aunty Mudo’ has been selling in front of the school for over two decades. She was overwhelmed with emotion when DPI spoke to her. “I am proud of the school. I am very happy. I am happy because I know the child going to the school and she is going to the same Mandir I’m going, so I’m proud of her,” she said amidst tears.

Then we caught up with Ivy Sealey – a grandmother who said: “I feel happy because the student has lifted up Essequibo and I feel happy about it. I would always encourage children to focus on their education.”

Resident Omkar Singh said: “In Essequibo, most people spend quality time with their children because education is better than silver and gold. I am happy about what is going on the Essequibo Coast,” he said.

Another resident, Kenisha Walcott said the region has endless potential. “I think it was incredible. And for the parents of Venisha, they should be proud. I believe that when these kids come from school, parents should assist with homework so that they could be successful.”

Minister of Business, Haimraj Rajkumar visited the region, on Friday, to award top performers of several primary schools. A former student of the Suddie Primary School, the minister said he was incredibly proud of the performance of the region, particularly CV Nunes Primary.

“I am very happy; this is not the first time Region 2 has produced the top student at the National Grade Six Assessment, so we have been doing good,” he said. 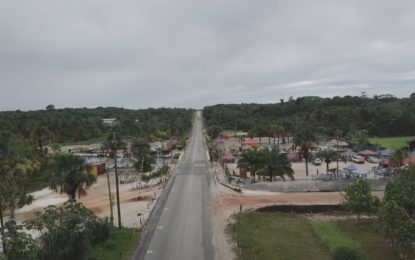 Author Details Shaquille Bourne Author email shaquille.bourne@dpi.gov.gy CORRECTION: An earlier version of this story incorrectly stated the amount for the feasibility study as $2B. The correct amount is $207 Million. Please see the amended article below.  Feasibility study and designs for Linden... END_OF_DOCUMENT_TOKEN_TO_BE_REPLACED

Promoting a love of reading