During day one of the Hague Convention Conference on Thursday, delegates were eager to get clarification on the practical implementation of the Child Abduction Convention.

Guyana is hosting the third regional Hague Conference on Private International Law (HCCH) at the Pegasus Hotel in Georgetown. The two-day inaugural conference was packed with presentations on conventions applicable to international family law, and legal cooperation and commerce. Presentations were made on the Child Abduction Convention.

Judge Cathy Hollenberg Serrette from the United States gave a detailed, yet concise explanation of the convention and how it can be utilised. Serrette is a judge on the seventh Judicial Circuit in Maryland, USA. 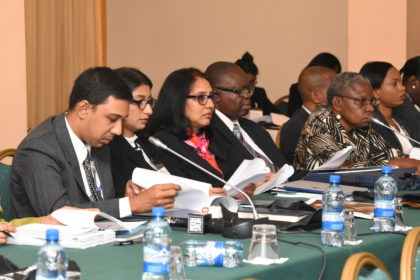 Delegates during the first day of the Hague Child Abduction Convention

Judge Serrette’s presentation focused on how countries which are signatories to this particular convention can use it to expedite the return of abducted children to their residence. More importantly, her presentation pointed out how the convention gives more flexibility and tools to be used by the courts especially in addressing highly contested custody cases involving an international family member.

“I know I can craft an order in my custody case using the language of the Hague Convention that would pretty much assure that if the international parent does indeed remove the child, and not return the child contrary to the representations in the court room, then I have the mechanisms of getting this child back and protecting the child’s best interest, “Judge Serrette explained.

Judge Serrette, in encouraging delegates to use the resources available on the HCCH’s website, pointed out how the articles from the Convention can be used by Judges.

Representatives from within the Caribbean region were eager for explanation following her presentation.  Justice Abdullahi Zuru of the Commonwealth Secretariat in Guyana queried how the criminality of abduction is addressed under the Convention.

Within the framework of the Convention, no one can be punished, explained Secretary General of the HCCH, Dr. Christophe Bernasconi. “We are not punishing anyone we are only seeking to protect the child,” he said.

Acknowledging that abduction is a criminal offence in many countries, Dr. Bernasconi noted that criminal cases can be developed independently of the civil case which would be governed by the convention. 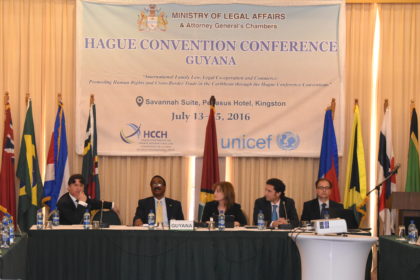 Panel on the Hague’s Child Abduction Convention (from left to right) Presenter Richard Williams of the Grand Cayman, Chair of the session Attorney General and Minister of Legal Affairs, Basil Williams, Presenter Judge Cathy Hollenberg Serrette of the US, Secretary General of the HCCH, Christophe Bernasconi (answering question) and Latin American Representative of HCCH, Ignacio Goicoechea.

Pointing out that the convention provides six weeks for the return of the child, Dr. Bernasconi added that the jurisdiction will have to examine its legislation to determine if it can prosecute the matter criminally in that time if it overlaps the criminal matter.

Delegates were also inquisitive about returning the child as was posed by the Caribbean Court of Justice (CCJ) Judges seeking advice on how to deal with the sensitive return of the child.

Latin American Representative of HCCH, Ignacio Goicoechea pointed out that time is critical in the return of the child. The convention makes provision for the processing of the child’s return within six weeks.

Meanwhile, Surinamese Minister of Justice and Police, Jennifer Van Dijk-Silos requested support for the establishment of a Central Authority in her country. There is a “blockade” the country is facing in signing on to the Convention, she explained.

Van Dijk-Silos was assured by the HCCH Secretary General that her matter will be addressed.

Justice Williams explained that the population of the small British territory is made up of various nationals. The state, he noted, has had to make representations in several cases to have the child returned to the island state following custodial battles.