Guyana is becoming more recognised on the international market as a tourism destination as the country’s booth at the recently concluded World Travel Market (WTM) in London saw an increase in visitors. 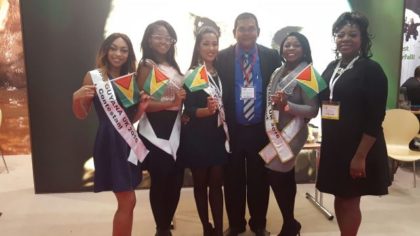 Miss UK Guyana contestants pose for a picture with Director of the Guyana Tourism Authority, Indranauth Haralsingh, in the Guyana booth at the World Travel Market, London

This is according to Director of the Guyana Tourism Authority (GTA), Indranauth Haralsingh who headed the team to the event held in London from November 7 to 9.

Haralsingh said that the increase in visitors is evidence of Guyana’s increased recognition in the international arena as a tourism destination.

The Kaieteur Falls, the Harpy Eagle, the Jaguar and Warapoka Village in Region 1 were some of local attractions highlighted at the World Travel Market.

“I must tell you that our booth traffic or booth visitation was extremely high; matter of fact World Travel Market this time around had record attendance of travel trade professionals of 51,444 trade professionals, who went there to conduct and do business from all over the world and they were from a 182 countries and 5500 were world class,” Haralsingh.

The GTA Director noted that the agency’s marketing efforts are paying off.  The Director said that the familiarisation tours, documentaries and films, distribution of brochures, and advertising are showing returns in investments or paying handsome dividends for Destination Guyana.

The GTA Director told the Government Information Agency (GINA), that consumers and travel traders at the WTM are aware and interested 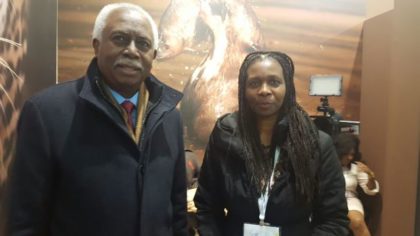 Hamley Case, Guyana’s High Commissioner to London in the Guyana booth at the World Trade Market

in Destination Guyana. He said that the awareness of this country, and the image and visibility of the destination have increased.

The Director also noted that some of the visitors to the booth had already visited Guyana and gave positive feedback to the team. They have now become Ambassadors for Guyana by encouraging their family and friends to visit.

Haralsingh stated that tourism plans are already in the making for 2017, and noted that whilst in London, a number of meetings were held with stakeholders.

“I had a key meeting with Red Bull out of Europe who are coming to do a major adventure series here in Guyana next year. They are bringing the world top five skate boarders to Guyana, and there is a huge following for these guys, and they are coming to help promote Destination Guyana,” the GTA Director said.