Minister of Communities, Ronald Bulkan, today, urged departmental heads of his ministry to not be side-tracked as the Coalition Government is functioning in accordance with the Constitution.

Meeting with his team at the ministry’s annual senior staff conference, Minister Bulkan sought to put all assumptions to rest as he made it clear that the government is legitimately in office and continues to work.

“I can assure you that I, in the capacity that I am currently acting, am not acting unlawfully, neither is the President, nor are we tyrants,” he told the senior officials.

Minister Bulkan reiterated that there is nothing illegitimate or unlawful about the administration. He called on the senior officials to not be distracted by what is happening, but instead, be focused on their professional responsibilities and duties. 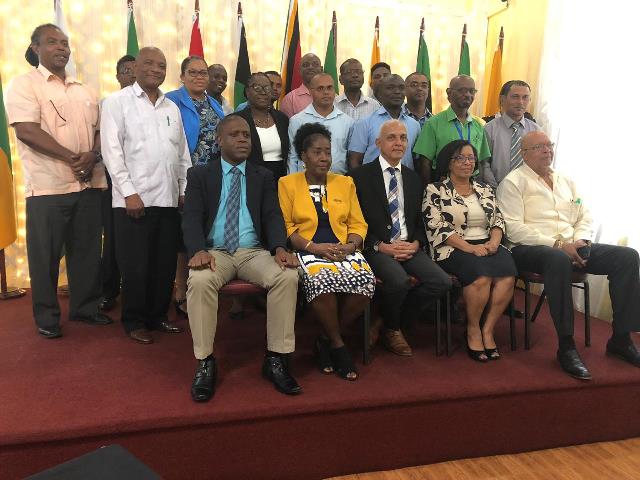 Minister of Communities, Ronald Bulkan and Minister within the Ministry, Valerie Adams-Yearwood [seated in front row] flanked by departmental heads. 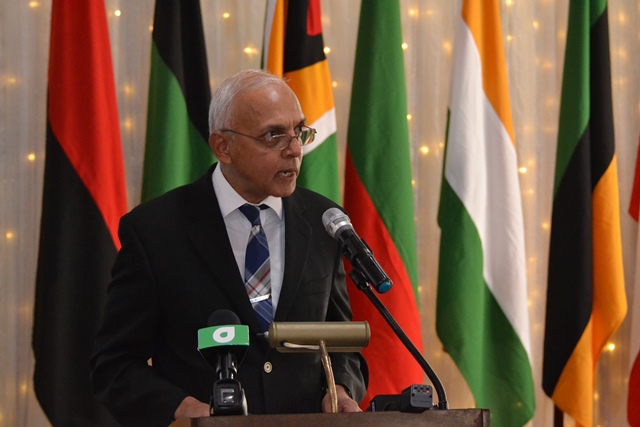 According to Minister Bulkan, the ministry intends to build on its unprecedented achievements this year.

“The focus for 2019 is to expand and improve participation aimed at promoting greater involvement in local government, improve sanitation management infrastructure, an improved, efficient and expanded water distribution, delivery of housing units and the sustainable consolidation of housing schemes.”

He added that officials need to remind themselves of their efforts and successes as they continue to discharge their mandates.

Over the past three and a half years, the ministry was able to significantly restore functionality to the system of local government by enabling the holding of two consecutive Local Government Elections. The ministry was also able to transfer power where it belongs – in the hands of the people and their duly elected representatives.

“We have established four new townships resulting in each of our hinterland region being home to a ‘capital town’; the first major municipal extension in over four decades. A number of communities, for the first time, elected local leaders with the activation of several NDCs increasing the coverage of electorates under a local authority area to 91 per cent.”

The ministry also redirected its housing policy which has resulted in remarkable improvement in the occupancy rate and has included youths in its housing solution drive.

“We have made significant strides in improving our water quality and have expanded its distribution providing thousands of residents with access to water for the first time. Our regions are now better positioned to deliver improved services with greater autonomy through our capacity building initiatives and programmes.”

The Ministry of Communities has been allocated some $10.09Billion in the 2019 National Budget. $124Million will be used to expedite recommendations from the Local Government Commission. Subventions for the municipalities totals $210Million, which includes $30Million for Georgetown, $18Million for each of the four new townships and Neighbourhood Democratic Councils (NDCs) will each receive $5Million.