Everything in place operationally to begin recount- GECOM PRO

─ Draft Order to be revisited for date selection.

The Guyana Elections Commission (GECOM), on Saturday afternoon, concluded its meeting with representatives of those political parties who contested the March 2nd Regional and General Elections.

Public Relations Officer for GECOM, Yolanda Ward told the media that before the meeting, the commission’s approved work plan for the recount process was shared with the political parties, to ensure questions were answered and explained today. 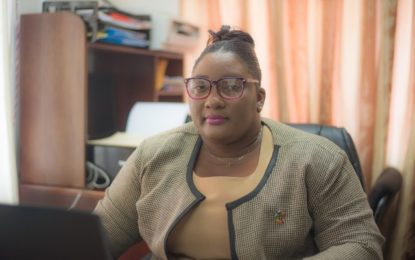 “Prior to the meeting, the approved work plan was shared with the parties for their perusal so that any question or clarifications they may have as it relates to that process, they can have those addressed at the meeting. It was an intense discussion,” the GECOM PRO stated.

Ward said among the matters raised was that of Live Streaming and “a number of the parties have asked the Chair to reconsider her decision as it relates to “Live Streaming.”

They have also proposed a methodology as it relates to the order of how the count is done, she added.

However, the parties felt this may cause some confusion, Ward shared.

“What the parties have recommended is that instead of doing the count in that manner, that it be done in a numerically because they anticipate that it might cause some amount of confusion with four containers being simultaneously opened,” Ward noted.

Adding that there were also suggestions for copies of all the Statement of Polls (SOPs), to be presented to the agents that would get the respective stations so that they may be able to compare the results on those SOPs vs the results that they will now come on the Statements of Recount (SORs).

The GECOM PRO said all matters raised by the party reps will be considered by the commission when it meets later on Saturday for its own commission meeting.

In the meantime, she assured that everything was in place operationally to begin the ballot recount.

“So, the outcome of today’s meeting, in particular, is to focus on the start date for the exercise, and for the operational matters to commence. Once the start date is announced it means we will  endeavour to ensure the order is gazetted at least by Monday.”

“The exercise cannot commence without a gazetted order,” Ward stated.

She explained that GECOM has a draft order however, that order will be based on this afternoon’s meeting now that the CARICOM team is on the ground.

“It is intended to be revisited to particularly focus on the start date for the exercise and any other minor adjustment that will be made based on the deliberations of the commission from this morning’s exercise,” Ward explained.

Earlier on Saturday, the CARICOM team was given a tour of the Arthur Chung Conference Centre where the recount will take place.