“Eyes of Broomes on you – Minister warns human traffickers

Minister within the Ministry of Natural Resources, Simona Broomes is confident that the introduction of syndicates will help to reduce instances of trafficking in persons (TIP) in the mining industry.

The Minister told the Government Information Agency (GINA) in an interview today, that human trafficking in sex and labour remains a concern for the government. Although there has been an increase in reporting of TIP cases  in the interior, Minister Broomes said she has seen reduction of such cases.

The Minister is hopeful that with the advent of mining syndicates, incidences of exploitation of locals and foreign nationals will be further reduced. 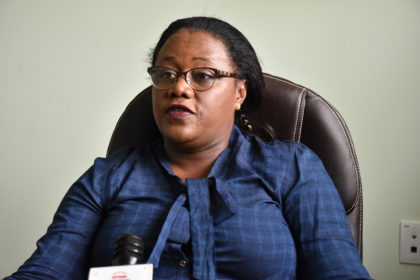 Minister within the Ministry of Natural Resources, Simona Broomes

“It is something that we are going to be dealing with. When you have the syndicates (in those) areas, alcohol will not be allowed to be sold there, trafficking in persons, labour trafficking in that area that in itself will start to eliminate a lot of the activity,” Minister Broomes explained.

The Minister added that for foreign nationals in particular, the syndicate offers protection against exploitation. “When it comes to trafficking in persons and labour trafficking, it is a big area and a big concern,” Minister Broomes told GINA.

Minister Broomes explained how traffickers would try to remove foreign nationals they are exploiting by telling them “we got to put you in a boat, we got to remove you because if these people (the authority) come they will beat you up, and they will imprison you and so many other different things.”

However, the Minister noted that more preventive work is needed to block “areas and opportunities of seepage.” Persons who continue to exploit others were put on notice by Minister Bromes. “Whatever tactic they have I want to tell them that the eyes of Broomes (are) on you.”

The government has a zero tolerance approach to tip towards reducing the incidence of trafficking. The Ministry of Natural Resources is part of the Ministerial Task Force on TIP.

Additionally, foreign nationals who join a syndicate can be assured that “an equal opportunity” will be theirs to earn a living in mining. Singling out Brazilian nationals, Minister Broomes noted that they have faced exploitation in the mining industry since they cannot own mining property.

Existing mining regulations prohibit foreigners from owning mining properties unless it is on a large scale.  Minister Broomes explained that some foreign nationals tried to bypass this regulation by partnering with locals only to be exploited later on.

“And so they are always left to deal with persons who own land in terms of getting position to work and they have complained, and it’s a fact, very challenging for them,” Minister Broomes told GINA.

Recognising that foreign nationals deserve the opportunity to earn a living as any other small miner, Minister Broomes noted that they can become a member of a syndicate to benefit. However, the Minister clarified that once foreign nationals have their work permits and documents they should be able to work.

“I just want to put it on record that the Brazilian being a part of the syndicate is not for one to mis-peddle. This licence is not in their name, but I think it’s an equal opportunity. They are human beings, they suffer like us; some of them are here for several years,” Minister Broomes explained.