The creation and restoration of modern Waterfront Recreational Areas and Stabroek Market are closer to becoming a reality.

Guyana has obtained a £53.2M grant from the United Kingdom’s Caribbean Infrastructure Fund (UKCIF) to improve or create new infrastructure to drive economic growth and development. 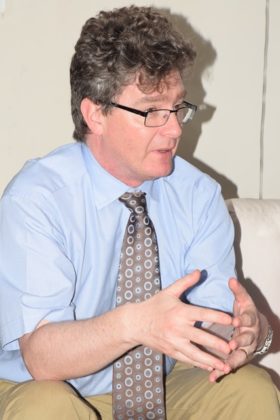 At a recent press conference British High Commissioner to Guyana, Gregg Quinn said the contracts for the technical design and feasibility study to restore and create modern Waterfront Recreational Areas have been awarded.

Quinn explained that the feasibility study and design studies for the creation and restoration of modern Waterfront Recreational Areas between Kingston and Ogle (including a Direct Overhead Link from Recreational Area at Seawall to National Park), and Stabroek Market and Vreed-en-Hoop, along with improved accessibility between the Waterfront Development at the Seawall and the Stabroek Market Area will now begin.

The expected duration for the studies is approximately nine months after which a decision will be taken regarding what exactly should be done on both studies.

The Caribbean Development Bank (CDB) will be responsible for overseeing these projects which will include improved road networks, bridges, stellings/wharves, waterfronts and other infrastructural works.

Quinn noted that the second aspect of the project is, “to pave the road between the Linden and Mabura Hills and put a bridge over the Kurupakari river.” The acquisition of a dredge is also a part of this project.

A Team from the CDB will be in Guyana from December 12 to 15 to formalise the agreement on the two projects.