(February 7, 2017) The first of 20 groups attached to the Community Organized for the Restoration of the Environment (C.O.R.E.) Project has been mobilised, with the Ministers of Public Infrastructure calling for greater community participation to lend to sustainability. 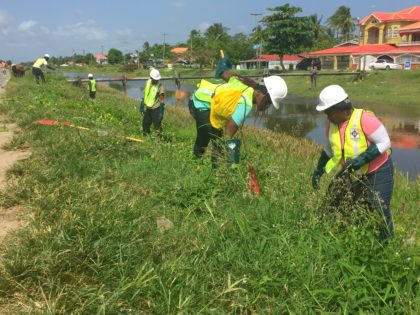 C.O.R.E. is a new initiative under the Ministry of Public Infrastructure (MPI) and seeks to empower and better communities through the formation of community groups aimed at the beautification of the environment. These 20 groups of 10 persons each are spread across the regions and will be working along with MPI’s Special Projects Unit.

The first group, hailing from Region 3, recently met with Minister of Public Infrastructure, David Patterson, and Minister within the Ministry, Annette Ferguson before they officially commenced works in Canal #1, West Bank Demerara.

“This is a way for us to use our own people to enhance our communities,” Minister Patterson said during the meeting. “It’s our way of getting communities involved in critical projects coming out of the Ministry.”

Minister Patterson further explained that the workers will be provided with all of the gear and equipment needed and will receive support from the Ministry, where necessary. He also emphasised to the workers that, as representatives of the Ministry, they had the responsibility of ensuring that work is completed efficiently and satisfactorily.

“I encourage you to use this opportunity to enhance your communities. You are not being sent out to lobby on behalf of the Ministry but 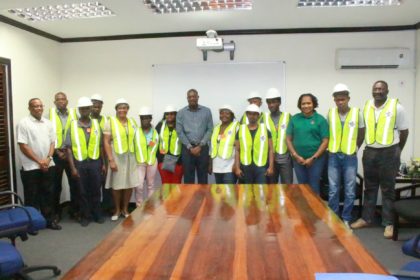 Members of the Region 3 C.O.R.E. group meet with Minister of Public Infrastructure, David Patterson and Minister within the Ministry, Annette Ferguson

rather to lobby on behalf of the community,” he added.

Meanwhile, Minister Ferguson noted the issue of unemployment in Guyana and indicated that the project was conceptualised with the provision of honest jobs for Guyanese in mind.

The 19 other C.O.R.E. groups will soon be mobilised, with Region 10 expected to be mobilised next. Responsibilities of the teams will include work that provides for environmental upgrade, drainage, sanitation improvement, and general aesthetical enhancements of the work being executed by the Special Projects Unit and will include weeding, cleaning, drainage clearing, and general beautification.

Each region will have two teams, except for Region 2, which will have one team, and Region 4, which will have three teams. Some of the identified communities are Moruka, Port Kaituma, No. 51 to Moleson Creek, Kato, Mahdia, Bartica, Lethem, and Linden.