Georgetown, Guyana – (September 12, 2017) First Lady, Mrs. Sandra Granger, today, sounded the call for amendments to be made to the legal system in the Caribbean that would holistically address the needs of vulnerable groups in the Region, including women and children; the Lesbian, Gay, Bisexual and Transgender (LGBT) community; victims of trafficking and other forms of abuse and persons living with or affected by HIV/AIDS. The First Lady made these comments on the heels of an awards ceremony organised by the Pan Caribbean Partnership against HIV and AIDS (PANCAP) to relaunch its ‘Champions for Change’ initiative. Mrs. Granger was among 15 persons who were honoured at the ceremony, which was held at the Marriott Hotel today. The other awardees include: Dr. Allyson Leacock, Dr. Arif Bulkan, Reverend Canon Grath Minott, Dr. Frank Anthony, Mr. Dwayne Gutzmer, Mr. Joel Simpson, Ms. Kenita Placide, Ms. Laura Tucker, Mr. Lucien Govaard, Ms. Nicolette Fernandes, Dr. Nigel Taylor, Ms. Nikkiah Forbes, Mr. Terrence Deyalsingh, Ms. Volderine Hackett and Reverend Winston Mansingh. 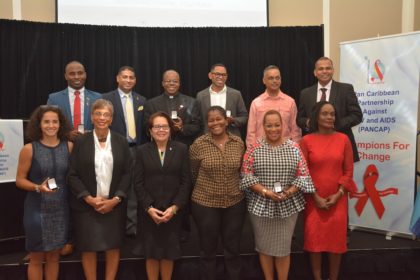 First Lady Sandra Granger, (third from left, below), among other awardees who were awarded by PANCAP for their stellar contributions in the Champions of Change initiative.

Mrs. Granger was honoured for her outstanding leadership in championing of the ‘Every Caribbean Woman and Every Caribbean Child’ initiative and other stellar work aimed at improving the lives of the woman and children of Guyana. The First Lady said that she is both humbled and honoured to have been recognised and that she is pleased to have been given an opportunity to not only share her concerns but, together with the Government, take steps to enhance the lives of vulnerable persons. people’s lives.  “I don’t think [that] I would have been a ‘Champion of Change’ if I was satisfied with the way things are in the Caribbean because it is said that there has been an upsurge in the incidents of AIDS and it is worrying because it is occurring in the Caribbean, particularly among girls aged nine to fifteen, ” the First Lady said.

Minister of Education and Chair of the PANCAP Regional Coordinating Mechanism, Ms. Nicolette Henry, while congratulating PANCAP for relaunching its Champions for Change initiative said that this achievement is paramount to achieving the United Nations goal by ending AIDS by 2030. “This initiative, I believe, can leverage the substantial gains in the HIV and response in this Region and we can continue progress. It will certainly not be possible without the advocacy efforts with the people living with and affected by HIV,” Ms. Henry said. 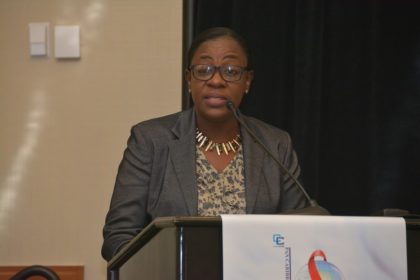 Minister of Education and Chair of the PANCAP Regional Coordinating Mechanism, Ms. Nicolette Henry, addressing those gathered at the Champions for Change IV relaunching today.

The Minister also said that a journey to a free world will have to be driven by a multi-sectoral approach, which includes a coalition of governments, the private sector, developmental partners civil society and renowned academics.

“This multi-stakeholders approach offers a useful model to resuscitating the champions for change imitative and I believe that it is both a timely effort and a reminder to recognise that the AIDS epidemic is not over… I believe that with the resuscitation of the Champions of Change initiative we will be building on to aggressively addressing the issue of stigma and discrimination, which can have a devastating effect on the lives of those living with HIV  and on those closest to them” the Minister said.

President of the Caribbean Court of Justice, Sir Charles Michael Dennis Byron, in his feature address spoke about the judicial attitudes and HIV, and the positioning of the Judiciary to effectively contribute to ending AIDS by 2030. Sir Bryon noted that cases of HIV/AIDS have repeatedly engaged the courts.  “They include challenges to decisions refusing them employment to persons living with HIV/Aids on the basis of their status and even complaints of discriminatory treatment by example officers of the court,” he said. 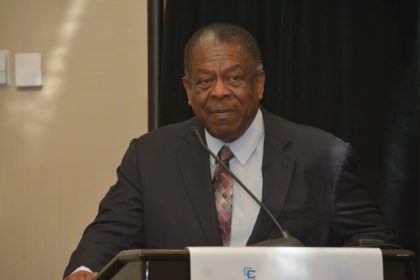 President of the Caribbean Court of Justice, Sir Charles Michael Dennis Byron, giving his feature address to those gathered at the Champions for Change IV relaunching today.

Assistant Secretary General – Human and Social Development, Caribbean Community (CARICOM) Secretariat Mr. Douglas Slater who spoke on behalf of Secretary-General of the Caribbean Community (CARICOM) Ambassador Irwin LaRocque, said that PANCAP is signalling to the region and world its intention to accelerate the process towards ending the AIDS epidemic.  “PANCAP has been the flagship that has demonstrated the true meaning of functional operation.  … PANCAP’s sustainability through 15 years has been in no small measure due to the support of governments, non-governmental organisations, the wide range of development partners, civil society and most important people living with HIV,” he said.

The PANCAP Champions for Change was initiated in 2004 and convened in St. Kitts and Nevis. The event brought together multi-stakeholder groups including parliamentarians, faith leaders, youth, private sector representatives, international partners and people living with HIV. It focused significantly on eliminating stigma and discrimination. The programme had gone on a hiatus in 2008 and was relaunched today.

PANCAP is a Caribbean regional partnership of governments, regional and civil society organisations, regional institutions and organisations, bilateral and multilateral agencies and contributing donor partners which was established on February 14, 2001. PANCAP provides a structured and unified approach to the Caribbean’s response to the HIV epidemic.