Georgetown, Guyana – (February 17, 2017) First Lady, Mrs. Sandra Granger, yesterday, told a group of teenage mothers enrolled in the Sophia Teenage Pregnancy Support Group that they can achieve anything that they set their minds to, during a visit to the Ministry of Public Health’s Regional Health Services Sophia Health Centre. 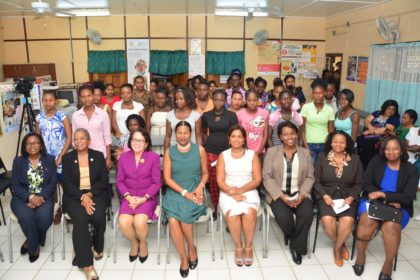 “You have to believe that you can jump as high and as far as you want to go… You can get a second chance and you must always be willing to try… because we didn’t all start out as confident women you know we had the same fears,” Mrs. Granger said.

The First Lady was joined on the visit by Mrs. Kim Simplis Barrow, the First Lady of Belize, Mrs. Martine Marie Etienne Joseph, the First Lady of Haiti and Mrs. Reema Carmona, the First Lady of Trinidad and and Tobago, who are accompanying their spouses in Guyana for the 28th Inter-sessional meeting of the Heads of Government of the Caribbean Community (CARICOM).  The visiting First Ladies all expressed an interest in seeing the operations at the Centre.

The Centre, which was established in October 2016, is the first of its kind in Guyana with the specific mandate of providing support to teenage parents. The First Lady told the teenagers that while each of us is different, we all share a common humanity and that they are important to their families and to the nation.  “The fact that we have come here and these First Ladies are interested to know what is going on here in Sophia with you and the progress that you are making it should tell you how important we believe you are to the development of our country and how important you are,” she said.

Mrs. Granger also praised the work of the Centre and the efforts made by the doctors, nurses and other staff there. She lauded the teenagers 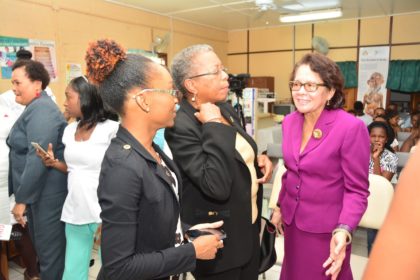 for enrolling to learn how to take charge of their health, their futures and the futures of their children. “You are, as prospective mothers or repeat mothers in some cases, willing to learn, to grow and adapt your selves so that you can become strong in yourselves and lead productive lives. A strong woman is a woman who can get up and say while I like the support, I don’t always need it. I can move forward and that is what I want you to believe of yourselves,” she said.

Meanwhile, in an invited comment, Dr. Krystle Fraser-Barclay said that the CARICOM First Ladies visit has done more to reinforce their efforts to boost the girls’ self-esteem than anything that they could ever have done.  “We are very blessed. We’re lucky to be in a country where we have a First Lady who is interested in women’s health, in particular adolescent teenage pregnancy… The fact that she was able to bring her fellow First Ladies here and to bring attention to the work we’re doing at the Sophia Health Centre and to the girls, that is a feather in our cap, in their caps,” she said.

Earlier today Mrs. Granger hosted a working breakfast for the First Ladies at the Guyana Marriott Hotel, during which they discussed ‘Every Caribbean Woman-Every Caribbean Child Initiative’. 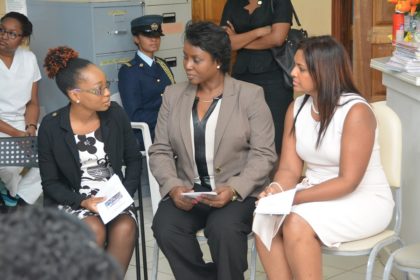 Mrs. Reema Carmona, the First Lady of Trinidad and Tobago and Mrs. Martine Marie Etienne Joseph, the First Lady of Haiti (first and second from right) pay keen attention to Dr. Krystle Fraser-Barclay during a light discussion after the meeting. 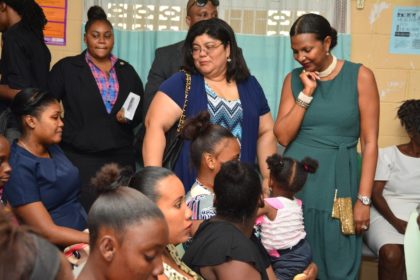 Mrs. Kim Simplis Barrow, the First Lady of Belize (first right) interacts with this toddler and her mother, after the meeting at the Sophia Health Centre