Government has embarked on restructuring the Ministry of Foreign Affairs so as to boost its capability to improve the nation’s standing in the international arena. Minister of Foreign Affairs Carl Greenidge, during his recent presentation on the 2017 Budget debate, informed the National Assembly that special emphasis is being placed on building Guyana’s international image. 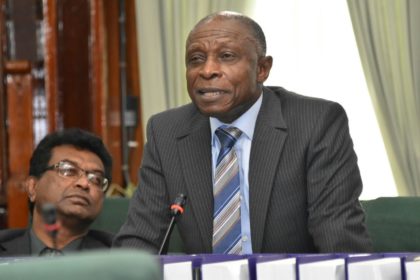 Minister of Foreign Affairs, Carl Greenidge making his presentation to the National Assembly during the National Budget Debates

The Minister explained that the Ministry has set out to ensure, “that not only appropriately trained competent ambassadors are appointed, but that step is complemented by the appointment of specially skilled Consul Generals, such as the Consul General in New York, who comes with special, both academic and people credentials necessary to facilitate handling of relations with the diaspora.”

The Foreign Affairs Minister added that several programmes were undertaken to enable the Ministry to fulfill its economic diplomacy programme and safeguard Guyana’s interests. All of this was done with the aim of obtaining maximum value for money, he noted.

“We reported last year on the efforts to recruit new ambassadors steeped in relevant skills and having experience necessary to prosecute our goals. I think we have been largely successful in that regard. There has been increased emphasis on economic diplomacy which requires the acceleration of trade and investment activities. It requires also that the Ministry fast-track training in various aspects of diplomacy,” the Minister said.

The Foreign Service Institute, Minister Greenidge stated, has been revitalised and is being utilised to play a greater role in fulfilling this task. He explained that in this regard, a number of training programmes in the areas of foreign languages and trade were successfully launched.

“They were supplemented by guest lecturers from distinguished invitees on issues such as the legal aspect of negotiating international trade agreements, border disputes, economic relations with EU (European Union) and BREXIT, as well as for example on the question of geographical indications which are on foreign sovereignty  and territorial integrity.”

Government via the Foreign Ministry is moving to rebuild and expand the capacity and capability of the nation’s interests, through the international arena.