Staff of the Foreign Service Institute of the Ministry of Foreign Affairs were today, debriefed on the possible effects of the immigration policies of the current United States administration. 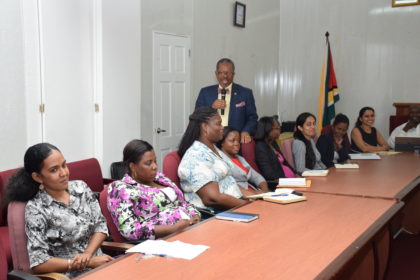 Vice Chancellor and Principal of the University of Guyana, Professor Ivelaw Griffith addressing staff of the Foreign Service Institute

Today, in the boardroom of the Ministry of Agriculture, a presentation by Vice Chancellor and Principal of the University of Guyana, Professor Ivelaw Griffith titled “The emerging Trump Administration Foreign Policy and dynamics related to Guyana and the Caribbean” was made to the staff.

The presentation was facilitated by the Ministry of Foreign Affairs.

Director of the Foreign Service Institute, Ambassador Ronald Austin explained that recent decisions on immigration by US President Donald Trump, “will have an immediate impact on our lives.”

He said, “We have to, I think first of all, in the Ministry of Foreign Affairs and I think throughout the Government of Guyana, decide how we respond to the emergence of President Trump and the consequences of his policies,” Austin said in opening remarks.

Last week, the US Department of Homeland Security revealed plans for the enforcement of immigration laws that have been deemed 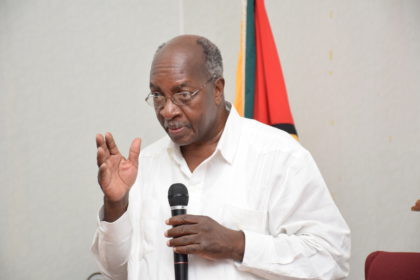 aggressive and discriminatory against Muslims.

According to CNN the “guidance memos expand the Federal Government’s ability to empower state and local law enforcement agencies to perform the functions of immigration officers, no National Guard troops will be deployed to round up immigrants in the US.”

Ambassador Austin stated that, “This is not abstract foreign policy, this is direct consequences of a man who has decided to change the way the United States sees the world, and in particular as far as the immigrant population is concerned in the United States.”

US President Trump is likely to sign a new immigration executive order on Wednesday, a day after addressing lawmakers at a joint session of Congress.