The Guyana Defence Force has officially welcomed 189 new soldiers to its ranks, following the completion of the Basic Recruit Course 2016-01.

The course commenced on March 12, 2016 with 202 recruits drawn from various regions. After 10 weeks of intensive training, 189 endured and graduated yesterday during a parade at the Drill Square at the Colonel John Clarke Military School in Tacama, Berbice River.

PTE Calvin Doris, a 19 year old resident of Belladrum, West Coast Berbice graduated Best Student of the Course. He also won the prize for having the Best Shot. The Runner Up prize was won by PTE Isaiah Rowlins. Prizes were also given to Privates Don St.Hill, Shaquille Smartt and Kemoe Marques for Best Drill, Best Fitness and Best Military Knowledge, respectively.

Chief of Staff, Brigadier General Mark Phillips in his address to the new soldiers congratulated them for successfully completing the course. He impressed upon them the importance of discipline, loyalty, fitness and obedience as they embark on their military careers.” To be a good soldier you must be ready to serve the GDF at locations throughout Guyana. You must understand your rights and duties under military law. You must keep continuing your education in focus at all time as you perform your duties and you must know and uphold at all times , the Values and Standards of the GDF. Remember the word discipline- the importance of self-discipline as you discharge your duties,” he said.

The Chief of Staff also admonished the new soldiers to readily conform to the Values and Standards of the Force, in order to earn the respect of the Guyanese society. “You must commit yourself to serving the people of Guyana. Soon, you will be deployed on

Operational duties to defend our borders and to support our civil authorities and to maintain a high level of public security throughout Guyana,” he added.

The objective of the Basic Recruit Course is to produce a soldier who is fit, obedient, loyal and discipline and possess high standards of Infantry Skills and Marksmanship abilities”. 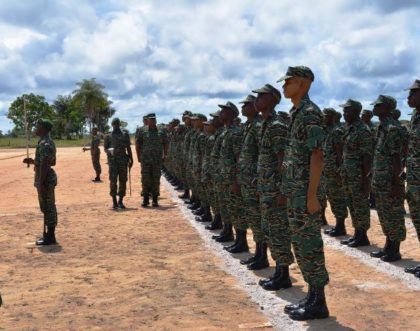 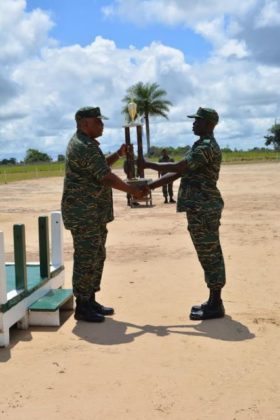 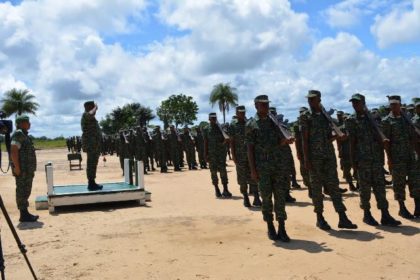