His Excellency President David Granger this morning reiterated that his government stands ready to accept the final declarations of the Guyana Elections Commission (GECOM) after the national recount of the March 2, 2020, General and Regional Elections is completed.

The national recount is currently ongoing at the Arthur Chung Conference Centre (ACCC) and is being overlooked by a three-member high-level team from the Caribbean Community (CARICOM).

The team has been asked to be a “third party” in the recount process, which is seeking to determine the credibility of the March 2, polls. 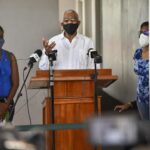 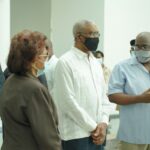 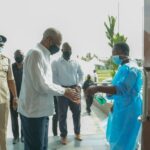 Speaking with journalists following his visit to the recount centre this morning, President Granger again reminded that GECOM is a constitutional body, and just as he and his government have done in the past, he will accept the decisions of the commission.

The Head of State was being questioned on his plans after the declaration, especially since the ongoing process has unearthed major discrepancies in the ballot boxes from opposition strongholds.

He maintained that he will stand with any decision by the commission.

President Granger recalled that on March 2, the voting process was “well managed and orderly.” However, determining the credibility of the results of those elections remains the job of the election commission.

“It would be premature for anybody to say whether the results of the 2nd of March were credible. That is what we are here to determine. That’s why a recount was necessary to determine the credibility of the elections”