(MOTP) Georgetown, Guyana – (September 5, 2016) Minister of State, Mr. Joseph Harmon, today, received a copy of the preliminary report of a legislative review of the laws that deal with land management.  This review was conducted by three Guyanese law students from the Hugh Wooding Law School. The report was handed over to the Minister by Commissioner and Chief Executive Officer of the Guyana Lands and Surveys Commission (GLSC), Mr. Trevor Benn and the three students: Mr. Glendon Greenidge, Mr. Joshua Benn and Ms. Erica Capell at the Ministry of the Presidency. 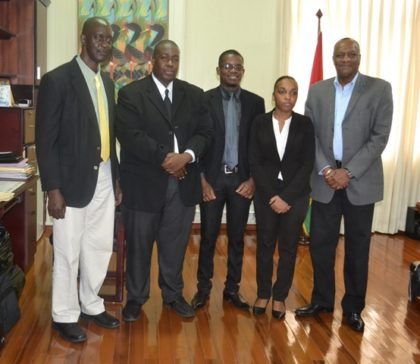 Minister Harmon, who had directed the Commission to look into the harmonisation of the laws that deal with land use and management, said that land is always the subject of some kind of controversy in Guyana. He explained that entire viability of the GLSC is dependent on it being able to exercise the authority, which it was given by law.

“The extent to which you have overlapping of authority, is the extent to which persons, who are the beneficiaries of State lands sort of dodge in between the raindrops… rather than paying [their] lease[s]… So rather than having a very clear, defined position people utilised that lacuna in the law to be able to benefit themselves,” the Minister said.

Mr. Benn explained that the students were asked to review the laws and to make recommendations to address the gaps, which they completed within three weeks. The report will also be presented to the board of the GLSC for its review and recommendations.

The review also addressed land leases and it recommended the amending of laws to reflect the kind of inter-agency harmony that is supposed to exist.