Minister Sydney Allicock has reiterated the government’s commitment to ensuring all indigenous communities are properly supported. The minister was at the time addressing delegates of the 12th National Toshaos Council at the Arthur Chung Conference Centre on Thursday last.

Focusing on the issue of land titles among indigenous communities, he reminded that the Presidential Land Commission of Inquiry was established to deal with land issues across the country. 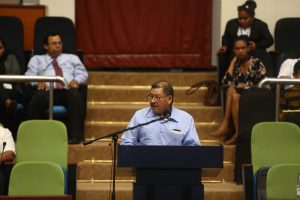 “The president [HE. David Granger] made possible an opportunity for addressing land issues to a COI, which was to deal with not only indigenous but other land users. This COI would have addressed and clarified all land issues and we would have been given the opportunity to work along with the Ministry of Communities and the NTC to help find the solution to these many issues,” he explained.

Due to the delay of land titles for indigenous communities, Minister Allicock said there are several elements to be considered since the COI is no longer involved. He said the setbacks are a result of misunderstanding and unpreparedness and urged the new National Toshaos Council to conceptualise better ways of conducting business.

“There must be a paper trail so that we can be able to have the relevant agencies involved for discussion. If this happens, we will be able to know which community needs help, what are their plans. Again, I must say the village improvement plan is crucial for this help. You have to justify, you have to show what is happening on the land,” Minister Allicock told the toshaos.

The COI was established to address the issue of land extension in indigenous communities and ancestral lands in coastal communities. However, this commission had been a source of controversy after the NTC and other Amerindian groups vehemently objected.

The Land and Life Commission is part of President David Granger’s Ten-Point Strategic Plan which he unveiled at the August 2015 National Toshaos Conference where he stated that “Land is life for the indigenous people and we are aware that over the last 49 years, there have still arisen many unresolved land claims and issues. Your government is aware of this problem.”