Minister Harmon during the meeting which also included ExxonMobil’s Country Manager Rod Henson, and Senior Director Deidre Moe said the Government is committed to enhancing the technical training provided at the TVET centres across the country.

“We really want to have a fresh look at the way we train our technical people at the technical institutes all across the country, because we believe there are great opportunities at the levels where those skills are required,” the Minister told the team.

The aim, Minister Harmon explained, is to develop of a pool of resources that can be utilised locally and in other Caribbean countries.

This, he said, is to ensure citizens take advantage of the opportunities that will become available in Guyana with the emergence of the petroleum sector.

At the secondary level, Minister Harmon added the Government is also looking at the re-introduction of Industrial Arts into the Curriculum, “We have to admit that not all of us are inclined academically in one way and therefore we must create opportunities … additionally, there are some of our young women who might have had early pregnancies we need to have them back again into the system.”

He emphasised the need for the Government to create an atmosphere to foster their reintegration. Minister Harmon said the Minister of Education Nicolette Henry will be engaged to determine the way forward.

The State Minister also emphasised the Government’s commitment to protecting the environment and updated the team on the progress of the Green State Development Strategy (GSDS), expected to be completed shortly.

Exxon’s Country Manager, Rod Henson expressed the company’s willingness to continue working with the Government and the Department of Energy. 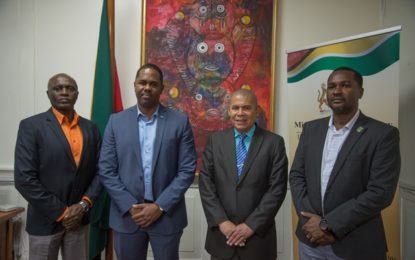 Changes to RLE legal and within the statutory...

Creating business opportunities for women and...