Georgetown, Guyana – (March 4, 2019) Minister of State, Mr. Joseph Harmon, yesterday, promised the residents of Victory Valley, Upper Demerara- Berbice (Region Ten) that the Linden Johnson Community Centre, which was destroyed by a fire of unknown origin over the weekend, will be rebuilt by the Government of Guyana in the coming months.

During a visit to the community today, Minister Harmon said the community centre is important not only to the young people in the village but to President David Granger as it was he [President Granger] who commissioned it in April 2018. The space, the Minister of State said, represents a refuge, a place of learning, growth and development for the youth. 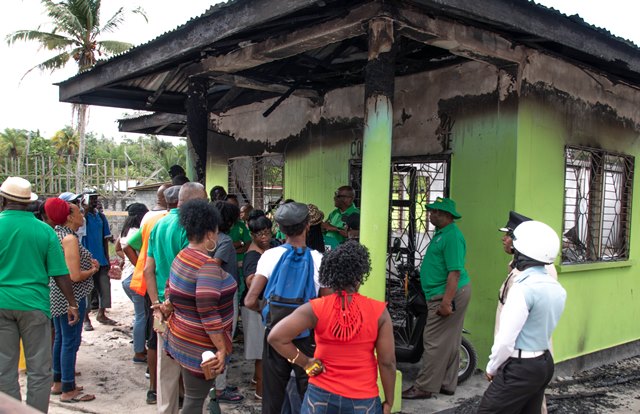 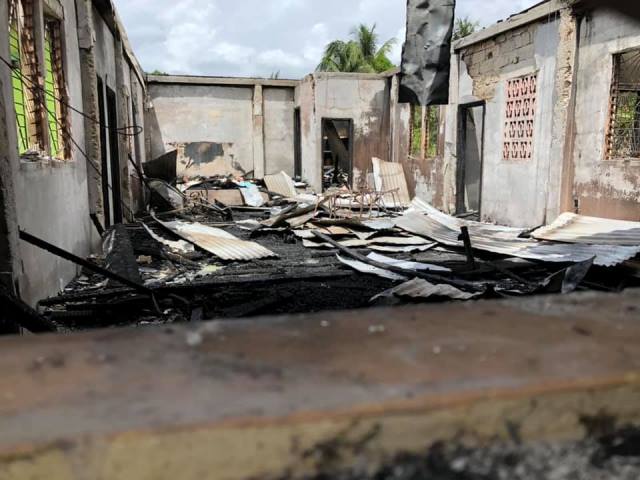 “We have to start cleaning up this place. From today or tomorrow, we are going to start cleaning it up because I have already told Member of Parliament, Mr. Jermaine Figuiera that we will rebuild it bigger and better than how it was. This is an important community for us and the President was here himself, I was here to hand over equipment and sports gear some time ago so I know what has been lost. The Police and Fire will do their investigations but irrespective of what the outcome is, we have to move on, so I am going to make a commitment to ensure that some of the requirements for rebuilding, that we can start getting it from next week. Don’t be sad and down, we are going to rebuild,” Minister Harmon assured the residents.

The Minister of State called on the residents of Victory Valley to work together to plan for the e reconstruction of the community centre.

“I need to see a plan that will show me bigger and better than this because when you build back, you don’t build back the same way. We need a plan and I want the community to have a part in that plan and we will cost it and start from next week. We shouldn’t let people believe that they can stop the progress we are making. This is just a spoke in the wheel but no one is going to stop our progress. We are going to come together and do this. I want this community to have a say,” he stated.

The Community Centre housed an Information and Communication Technology (ICT) hub, which assisted the youth from various communities including Victory Valley, Blueberry Hill, Silver City and Wismar Housing Scheme to complete assignments and do research.

With residents concerned about the impact this will have on the students, Minister Harmon said that he will engage the National Data Management Authority (NDMA) E-Government Unit to determine if the connection can be located temporarily until the new building is completed.

Meanwhile, Mr. Keith Ferriera, a resident of Victory Valley, said he is pleased Minister Harmon visited the community and welcomed his announcements.

“We are so pleased and we welcome what you have just said. I can say that the youths of this community especially would appreciate that this centre will be rebuilt because it provides so much for them,” he said.