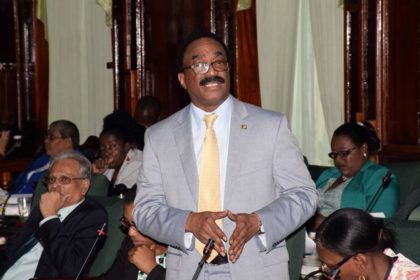 Minister of Legal Affairs and Attorney General Basil Williams today, faced questions from the Opposition in the National Assembly, during the Consideration of the Estimates and Expenditures for the 2017 budget, over the constitution of the Law Reform Commission.

Williams, responding to questions from Opposition Member of Parliament, Anil Nandlall about appointments for the constitution of the Law Reform Commission,  noted that “as soon as we secure the funding we will proceed.” constitution of the Commission to execute law reform, it “must be distinguished from law revision which IDB (Inter-American Development Bank) funding has already been given …and that review process was muddled up by the last government which caused us in fact to be prejudiced in receiving further funding in relation to law review.”

The Legal Affairs Minister noted that his ministry is in the process of finalising the rental of a building to house the Law Reform Commission, as well as provisions for the furnishing of the Commission.