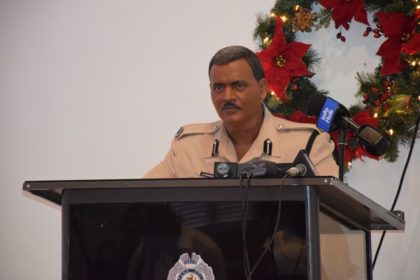 Commissioner Ramnarine made this statement during the GPF’s end-of-year press conference on Friday, at Eve Leary, Georgetown.

“The Guyana Police has delivered, could we have done more, certainly. As you would know, they were distractions, from within and from outside. Nevertheless, the force stood strong and tall and delivered a satisfactory performance as of the 31, December 2017 when compared with previous performances.” the acting commissioner said.

He noted that the Force recorded an 11 percent decrease in serious crimes in 2017 when compared to 2016. Ramnarine noted that prior to the last two weeks in 2017, this rate was at 10 percent.

The Acting Commissioner explained that “…to achieve that additional one percent decrease to make it 11 percent on December 31, quite a lot of work had to be done. So, the citizens of this country should feel satisfied that while they were entitled to their entertainment, the ranks of the Guyana police force gave an extra effort to reduce crime further”.

“We have not taken comfort in that fact there were just a few more reports in 2017.We deem it to be unacceptable…” the Commissioner stressed.

According to Ramnarine, in December 2017, following good investigative work by the police force “two persons were investigated, one with three counts involving robbery under arms where vehicles were stolen and we currently have a case between ‘C’ Division and ‘D’ Division with one person that is under investigation. ”

The Acting Commissioner stressed that the GPF has observed that these carjackings appear to have some sort “criminal industrialised concept.”

“This percentage has been very high for the Guyana Police Force and for this country for quite a long while and we believe this ranks among the highest solve or clear-up rate anywhere in recent times.”

Over the past few years, the high increase in piracy has been very alarming. Acting Commissioner Ramnarine reported that 2017 saw nine such reports, of which seven occurred between August and September. The other two cases were reported following that period.

Ramnarine said the force believes that “with the interdiction of a gang of nine including two foreigners in Region One, where two boats were ceased, firearms and narcotics, would have put a dent in piracy. Also, the police floating base which is well equipped.”  He also acknowledged the assistance of the coast guard in that area.

Trafficking in Persons (TIP) also saw a substantial reduction of approximately 271 percent. This was due to increased awareness and provision and access to much-needed training, and the robust implementation and execution of the TIP National Action plan.