-measures in place to respond to emergencies

The Guyana Power and Light Incorporated (GPL) has taken steps to remedy the damage to its submarine cable in the Demerara River on Friday as it looks to ensure a stable power supply for Christmas.

In an interview with DPI this afternoon, GPL’s Divisional Director of Projects, Mr. Bharat Harjohn said the company is awaiting a response from the maker of the 69kV submarine cable to further outline the necessary repairs. 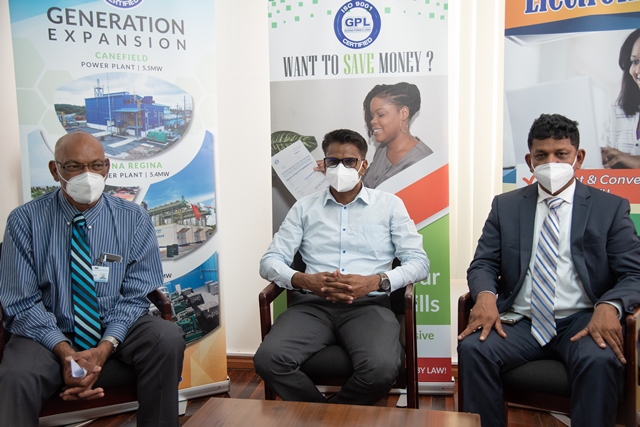 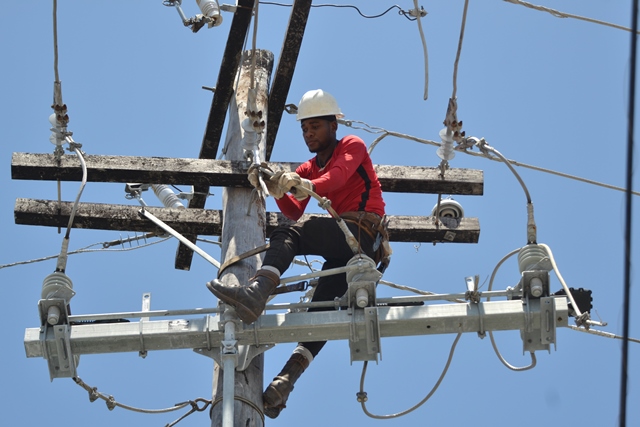 A GPL crew member at work in Tuschen, Region Three

The cable was struck by a ship’s anchor on Friday, resulting in severe damage to an existing splicing joint from a similar incident last year.

The cable links the Vreed-en-Hoop and Kingston power stations. The damage resulted in power disruptions in several communities in Regions Four, Five and Six on Friday and over the weekend.

Mr. Harjohn said the response from the manufacturer will determine the time technicians arrive in the country to address the repairs.

The damaged cable has created an unsustainable situation in the Demerara-Berbice Interconnected System (DBIS) where it is now out of the grid. The Vreed-en-Hoop power station now has little support to power the eastern end of the Demerara River due to the disruption.

Discussions are underway to bury the cable deeper into the Demerara River bed to prevent a recurrence of the incident.

While power was over the weekend restored to a number of locations within the DBIS, GPL has had to grapple with other outages.

GPL’s Executive Consultant, Mr. Bharat Dindyal said there were faults in the transmission lines between Sophia and Golden Grove substations; Sophia and Kingston, and Sophia and Columbia.

While these lines were re-energised, Mr. Dindyal said if there is another trip in the Sophia to Kingston transmission line, a temporary power supply would be installed to mitigate any disruption.

He also explained that there was an interruption in the largest circuit between Edinburgh and Parika. Mr. Dindyal said while this was repaired, teams are in place to identify any potential threats along the circuit.

With an increased demand on GPL for power, Deputy Chief Executive Officer – Strategic Operations, Mr. Samaroo Ramtahal said progress has been made to increase the company’s power generation.

Teams are said to be in place at Canefield working to operationalise additional generating sets.

“We are trying all the possible options to ensure that we make up for the shortfall that we are having currently because of the submarine cable,” Mr. Ramtahal added.

The Deputy CEO said the acquisition of 4.5 megawatts from Giftland is to meet the Christmas season demand.

“We are hoping 10 megawatts of Caterpillar gensets will be here within a week and we are hoping to get that on stream and connected for the Christmas.”

The added capacity will result in 159 megawatts available within the DBIS, which also accounts for the 13 megawatts that will be accessible following maintenance which will be completed on December 9.

This new generation of power will be distributed evenly among the Canefield, Sophia and Onverwagt sub-stations.

Additional emergency teams are also on standby for the holiday season into mid-January to address any challenges that may arise. GPL has said its planned maintenance activities will be suspended from December 15, after which the company will focus entirely on emergency responses.

GPL has a robust customer service system to address emergencies through its service centre.