Georgetown, Guyana – (March 12, 2018) President David Granger said that Guyana’s ‘green’ development thrust is not merely about environmental and economic security, but that it is also about energy security. Speaking at the International Solar Alliance (ISA) Founding Conference and Solar Summit, which was held yesterday in New Delhi, India, the Head of state told world leaders about Guyana’s strategic equatorial location, which puts it in an ideal position to become a ‘solar state’. “Its [Guyana] strategic location in the Tropic of Cancer, and a mere 6.8 degrees north of the Equator, makes it suited for solar energy generation. It enjoys an average of 12 hours of daylight, all year round, with consistently high levels of solar insolation,” he said.

President Granger told the high-level forum that Guyana’s low population density of 3.5 persons per km2 and the fact that many of its hinterland communities are small and isolated make solar energy a necessary response to the challenges of its demography and geography. He explained that the development solar energy generation options, by reducing the negative effects of the use of fossil fuels, will ensure improved air and water quality while mitigating the adverse effects of climate change.

“Guyana has begun to transition to increased solar power generation and use. Solar farms are being planned and established. Solar-powered street lights are being installed and Government buildings are increasingly being equipped to use solar energy. Incentives are being offered to encourage this transition to solar technologies. Guyana has the physical conditions for increasing generation but needs technologies to develop capacity in the solar energy sector. Much more needs to be done in other fields such as education, communication, transportation and housing,” the Head of State said.

In this regard, he called on the ISA to ensure that sun-rich states such as Guyana, have access to the necessary solar technologies. The President also urged this international body to ensure that small states benefit from investment, innovative technologies, photovoltaic infrastructure, information-sharing and the dissemination of scientific and technological data.

He said that the ISA represents a leap forward towards ensuring that solar power becomes more accessible and more affordable to more people. “Small states are limited not only in size but usually, also, in human resources, technology and capital. Small states need support in the form of investment, innovative technology, infrastructural photovoltaic systems and capacity-building in order to close the technological gap with larger and richer states. The International Solar Alliance, from the start, should support the energy ambitions of the small, sunbelt states by promoting investment-financing mechanisms for solar technologies,” President Granger said.

He pointed out too, that the ISA must promote information-sharing and technology transfer relating to solar energy and capacity-building in the solar energy sector.

Guyana signed and ratified the Framework Agreement of the International Solar Alliance on January 30, 2018. The President described the ‘Alliance’ as an essential element in ensuring energy, economic and environmental security.

The ISA Framework Agreement was launched on November 30, 2015. It is an action-oriented international and inter-governmental organisation that aims to maximise the harnessing of solar-energy potential, modernise energy systems, universalise access to energy, accelerate economic development and alleviate poverty. This Solar Summit was hosted jointly by the Governments of India and France.

On February 27, President Granger received a formal invitation to the summit from Indian High Commissioner, Mr. Venkatachalam Mahalingam and Ambassador of the French Republic to Guyana, Mr. Antoine Joly. 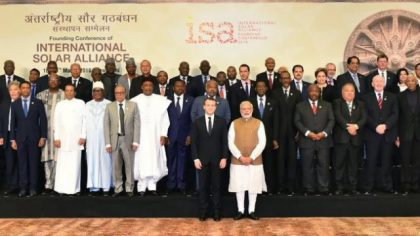 Heads of States and delegations who attended the International Solar Alliance (ISA) Founding Conference and Solar Summit which was held on Sunday.