(MOTP) Georgetown, Guyana – (September 30, 2016) President David Granger and Chinese Ambassador to Guyana, Mr. Zhang Limin, this evening, pledged to continue working together to deepen and strengthen the relations shared between The Cooperative Republic of Guyana and The People’s Republic of China (PRC), for the mutual benefit of the two nations especially in the pursuit of a ‘green’ agenda and sustainable development as the world continues to grapple with the effects of the Climate change and global warming phenomena. 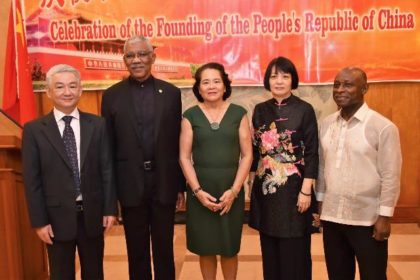 President Granger, who was at the time attending the 67th anniversary celebrations of the founding of The People’s Republic of China, held at the Chinese Embassy, earlier this evening, said that Guyana, since the inception of the PRC, has always been a partner of the nation.

“Guyana recalls with pride its adoption of a principled position 45 years ago, when the countries of the world were deeply divided, to have voted in support of United Nations General Assembly Resolution 2758 in October 1971. Resolution 2758 recognised the representatives of the government of the People’s Republic of China as “the only legitimate representatives of China to the United Nations.” Guyana has never changed its principled position and remains committed to a “One China policy,” the President said.

As Guyana prepares to celebrate National Tree Day 2016 tomorrow, the Head of State noted that while Guyana shares with China, common values such as mutual respect for each other’s territorial integrity and sovereignty, mutual non-interference in each other’s internal affairs, cooperation for mutual benefit, respect for treaties and international law and the maintenance of international peace and security, a major common interest is the promotion of sustainable development, particularly, in the area of renewable energy; an area the Guyanese President has been pushing since his assumption to office, given Guyana’s possession of hectares of virtually pristine, untouched rainforest.

“Guyana has observed, with keen interest, China’s introduction of its 13th Five-year Plan (2016-2020) which committed to achieving a ‘green economy’ by introducing ‘green’ low-carbon industries, expanding sustainable energy sources, extending forest protection and establishing a ‘green’ development fund. Guyana, through its own ‘green agenda,’ has similar objectives. We look forward to intensifying cooperation between our two Republics in our common quest to ensure greater use of clean, green and low-carbon technologies and renewable sources of energy,” President Granger said.

This cooperation, the President said, is something to look forward to as since diplomatic relations between Guyana and China were established in 1972, the two states have only continued to grow in their cooperation.

“Guyana and China have now maintained mutually beneficial, high-level, and friendly relations for forty-four years through continuous cooperation in several spheres. Guyana and China have collaborated in academia, culture, defence, energy, health, infrastructure development, medicine, mining and other fields.  We look forward to building further on the firm foundation of this solid long-term relationship.  Guyana shares with China a desire to deepen and strengthen economic relations and trade ties to our mutual benefit,” he said.

The President highlighted that China has emerged as one of the largest and fastest-growing economies and the largest trading nation in the world and the country’s economic advances over the past twenty years have been accompanied by increased investment and trade with the rest of the world, including the Caribbean. This cooperation with the Caribbean, which has extended to Guyana, President Granger said, is deeply appreciated and will only serve as an impetus for continued collaboration.

“Guyana welcomes, especially, the introduction of the multi-lateral, multi-billion dollar platforms such the People’s Republic of China- Latin America and Caribbean (PRC-LAC) Industrial Cooperation Investment and Infrastructure Funds. These initiatives will certainly strengthen our economic relations,” he said. 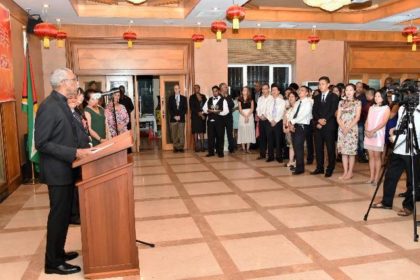 President David Granger addressing the gathering at the celebration held in honour of the 67th anniversary of the founding of the People’s Republic of China, at the Chinese Embassy in Guyana, earlier this evening.

Ambassador Limin, in his remarks, said that the relations between Guyana and China have been marked only by cooperation, collaboration and a friendly approach to economic and social development.  The Chinese Ambassador urged the local Chinese population to respect the cordial relationship which has existed between the two countries till now by upholding and having due respect for the laws and regulations of the land.

“Over the years, the Chinese people and companies in Guyana had taken an active part in the social life and the public welfare undertakings of Guyana. You have won the respect of the local friends by diligence and self-discipline. I hope you would cherish the fine tradition of the China/Guyana friendship, abide by the local laws and customs. While developing yourself, please remember to fulfill the social responsibilities and continue your responsibility to promote the friendly relations between China and Guyana,” Ambassador Limin said.

He noted that President Xi Jingping of China considers Guyana a friend of the country and he expects that with time, the relationship will bloom into more fruitful, deeper and meaningful encounters, since he believes that the country is filled with great hope and even greater potential.

“Friends make distance disappear and that is how Chinese President Xi Jingping has described the relations between China and the Latin American and Caribbean countries including Guyana. China and Guyana are separated by mountains and seas but the two countries enjoy a long standing traditional friendship since the Chinese first arrival in Guyana in 1853. The Chinese people have taken Guyana as their second hometown,” he said.