The Ministry of Tourism is seeking to craft a policy to boost agriculture tourism, and create awareness of the sector’s importance.

Director General of Tourism, Donald Sinclair explained that at the recently held coconut festival, it was realised that there is vast potential for agriculture tourism in Guyana, especially through coconut-based products. He said it was then the initiative was submitted.

The tourism policy will set out what agriculture tourism means, and the ways in which Guyana can grow its potential in this regard. This, Sinclair said, would require collaboration among the Ministry of Agriculture, agricultural stakeholders, and tourism entities and other stakeholders and agencies.

Sinclair told the Government Information Agency (GINA) that agriculture tourism will provide a market for small and large farmers to sell their produce. He added that there is an abundance of produce that can be used to promote the sector.

“Agriculture tourism is not limited to coconuts; it has a wide range of applications; it basically means generating tourism experiences and generating tourism revenues from agricultural products including rice, sugar, coconuts, and, participating in festivals,” Sinclair explained.

Sinclair added that agriculture tourism has a wide application that moves from the farm to visiting farms, factories, festivals and agricultural 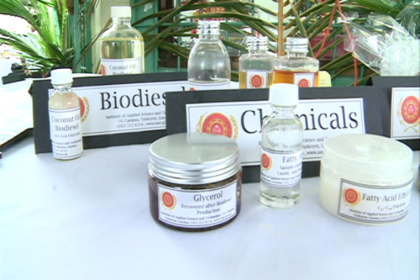 Local coconut oil that can be used in promoting agriculture tourism

heritage sites. The Director General emphasised the need for the initiative, noting that it is also a means of generating income.

The Pomeroon, Region Two and Canje, Region Six areas were cited by Sinclair among sites that can be used to promote agriculture tourism.

The official is urging hinterland communities to get involved, noting that they are the basis for the overall development of local tourism.

“Tourism presents the Indigenous communities an opportunity to build a labour- intensive indigenous industry which would benefit local communities. Indigenous persons could be trained as guides, since they have an unrivalled knowledge of the local terrain and its natural resources. Further, they are more likely to remain in these areas in the long-term than the average coastlander,” Sinclair explained.

The Tourism Ministry had also stated it would be intensifying efforts in 2017 to improve and make diaspora tourism more sophisticated. This, coupled with agriculture tourism is aimed at the overall enhancement of the country’s economy.