Minister of Business and Tourism, Hon. Dominic Gaskin, on Wednesday declared that the economic priorities of the Government of Guyana can create opportunities for Chinese businesses in the areas of manufacturing, agriculture and infrastructure development. He explained that Guyana, despite being a small economy, had natural resources and agricultural lands on par with more developed countries and that his government was seeking to fully exploit these advantages for the benefit of the Guyanese people. The Minister stressed that in order for Guyana to become a more competitive producer of secondary products it needs rapidly accelerate its infrastructure development, and that this could create opportunities for Chinese companies with the necessary expertise. 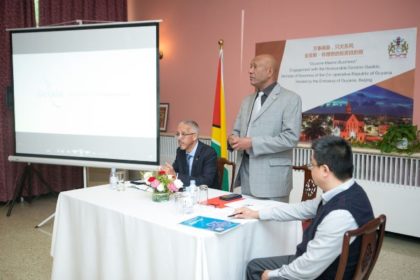 The Minister who is in the Asian nation this week to attend the 10th China-Latin America and Caribbean Trade Summit told a high-powered group of Chinese investors that both Guyana and China can benefit by matching excess capacity in China’s infrastructural sector with Guyana’s need for improved infrastructure.

Addressing an audience of investors, CEOs, CARICOM Ambassadors and Chinese media representatives at Guyana’s Embassy in Beijing, Minister Gaskin stated that in order to better exploit its natural resources, Guyana needed access to expertise, technology and markets for agricultural products and other processed goods.

The Minister explained that with increased mechanisation and investments in the agricultural sector Guyana could be a key contributor to food security in the Caribbean. He advised representatives of several business groupings that they were welcome to visit Guyana at any time in order to explore linkages and see for themselves the kinds of opportunities that existed. He also issued an invitation to Chinese companies to attend the next GuyExpo which is scheduled for September, 2017.

In response to a query concerning airline connectivity, the Minister of Business acknowledged that Guyana did not currently have direct flights to many of the major global destinations and that this was due to the low demand resulting from Guyana’s small population and underdeveloped tourism potential. He stated that Guyana was promoting nature tourism and that the issue of low airlift would be addressed as tourism to Guyana increases.

The well attended event was organized to highlight Guyana’s investment prospects and to introduce the Minister to the Chinese business sector.