Minister of Natural Resources Raphael Trotman has signed Memorandums of Understanding (MOUs) with the Mexican Institute of Petroleum (IMP) to build capacity in the emerging oil and gas sector.

The three MOUs were signed yesterday in the boardroom of the Ministry of Natural Resources, Brickdam between the Minister and Director General of the IMP, Dr Ernesto Ríos Patrón. 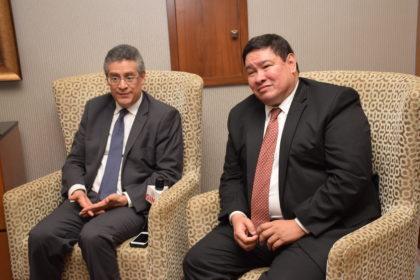 In an interview with the Government Information Agency (GINA), the Mexican Ambassador to Guyana Ivan Roberto Sierra-Medel said the MOUs were the most important exchange between the two countries.

“… Their goal (IMP) is to build a two way communication that creates domestic capacities in Guyana and I think this is a step in the right direction,” Ambassador Sierra-Medel added.

Guyana is a new entrant in the oil industry, and sharing Mexico’s expertise and experiences with Guyana fosters overall development, Ambassador Sierra-Medel noted.  The IMP in turn stands to benefit by creating technical confidence to eventually provide some services to Guyana.

Dr Ríos noted that the MOUs provide for the creation of three white papers, training of human resources in labour, technical and professional jobs and the creation of a technical background and overall technical framework for Guyana.

A team from IMP will be in Guyana collecting data to complete the three white papers which have a six-month deadline. Dr Ríos explained that the white papers aim to “build an overall balance of demand and supply of oil and gas in the local industry.”

The team will share its techniques and methodologies and best practices with the government. “What we expect to be doing for the Guyana Government (is) to build their own documents and to build a set of concepts…that are Guyana’s concept to develop their own industry,” Dr Ríos explained.  The white papers will outline potential policies which can be used in the Guyana context. 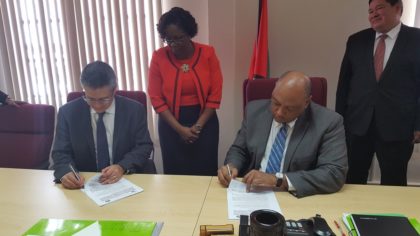 The white papers are expected to be “a point of conversation” among the government, society and the industry on the sustainable, mid and long-term, development of the fledgling oil and gas industry.

Upon the completion of the data collection, a representative from Guyana will travel to the IMP in Mexico for its analyses before the final scope of the papers is settled here in Guyana.

“The idea is to help build capabilities…to facilitate a process for someone to build up these white papers and these ideas and then become an active person that will bring those ideas into the Guyana community,” Dr Ríos explained.

The training which will be provided by the IMP will focus on three main areas. The IMP has proposed training in Sciences of the Earth which includes studies such as geophysics and geology.

There will also be the building of technical labour in critical positions such as welders, supervisors of drilling teams and technicians to collect data and information for environmental purposes.

Dr Ríos cautioned that these were just examples of technical labour in which the IMP facilitates training. The government is still to determine the areas of training for which it wishes to develop capacities.

Dr Ríos explained that the Institute will create a ‘tree’ of competencies and out of that “we will come with the value chain and compare the abilities based on what time of the development you are,” to determine the training that will be required.

The MOUs aim to provide Guyana with lasting technical knowledge and best practices in the industry. The IMP is financing the projects identified in the MOUs. While not providing an exact number, Ambassador Sierra-Medel said it is a “considerable investment”.

The IMP has over 50 years of experience in Mexico’s petroleum industry and is the country’s leading research centre dedicated to technological research and development, provision of engineering and technical services, training, and awarding degrees, and participating in strategic and technological joint ventures.

Mexico has 100 years’ experience in extracting oil. The country’s assistance to Guyana in the development of its oil and gas industry dates back to 2015. Last June a team from Mexico was in Guyana to offer technical support to the Ministry of Natural Resources in the development of a Petroleum Regulatory Agency and Institute, tertiary and technical education and training in the mining, oil and gas and environment sectors.

Outside of the oil and gas sector, Mexico’s relations with Guyana includes the granting a scholarship for a Guyanese to pursue a Masters in Coconut Biology. Recently, the country announced the importation of Guyanese rice to its markets.