Guyana has seen an 11.6 percent increase in tourist arrivals as of September 2016, over the corresponding period last year, according to Director of the Guyana Tourism Authority (GTA) Indranauth Haralsingh. 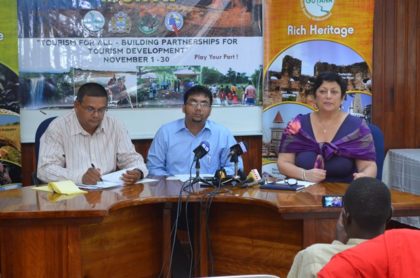 Speaking at the launch of Tourism Awareness Month, today, at the Ministry of Business, South Road which is being celebrated under the theme “Tourism for All- Building Partnerships for Tourism Development”, Haralsingh noted that tourism contributes significantly to the country’s image and visibility. The Business Ministry has responsibility for Tourism.

The GTA Director highlighted that in May 2016, an all-time record of 102 percent increase in visitors for Guyana’s Golden Jubilee Celebration was recorded, and the observance of Tourism Awareness Month is an opportunity to celebrate and reflect on the social and economic value and potential of the tourism sector.

“Our goal is to continue to increase visitor arrivals in Guyana, to increase their length of stay and to get them to spend more,” Haralsingh said

The Director also highlighted that tourism is estimated to be approximately eight percent of the Gross Domestic Product (GDP). He noted that for 2015, over 206,8oo people visited Guyana’s shores.

“Tourism encourages and generates expenditure. Each time a visitor comes to Guyana they spend money in our economy, and so our tourism industry basically generates billions of dollars in visitor spending each year,” he noted.

The GTA Director highlighted that the taxes collected through revenue in the tourism sector help to build roads, buy text books for school children, and provide beds for hospitals among other initiatives.

Haralsingh emphasised how important partnerships are in every level of the tourism sector especially the media, noting that Tourism Awareness Month highlights the tremendous value of the industry and celebrates the hundreds of business, communities and individuals that help to make Guyana a competitive and sustainable destination.

Meanwhile, President of the Tourism and Hospitality Association of Guyana (THAG) Andera De Caires, stated that the media plays a very important role in tourism.   “Visitors visiting the country don’t know who are private media and who are government (media), but all they know is that they are a guest in our home,” De Caires stated.

She noted that it is the job of every citizen to greet all guests as “though they are all a special visitor”.  De Caires added that it is very important that the media sees the partnerships happening in tourism because “tourism is not political, tourism is hospitality, and tourism is for everyone.”

THAG’s President expressed pleasure to be launching the Explore Guyana magazine which is the number one tourism vehicle publication in Guyana and will be launched at World Travel Market (WTM), the largest travel show worldwide in London on Monday.

There is also the annual essay contest under the theme “Clean it and mean it” where children at the primary and secondary school levels will participate and the winners will be published in next year’s edition of the Explore Guyana magazine.

Restaurant Week which is being held for the third year in a row will be different this year with a scavenger hunt, whereby persons who visit the restaurants on the list will receive clues and points and at the end of the week, the person with the most points will win spectacular prizes.

The food for Restaurant Week will allow persons to enjoy fine dining at reduced prices. Persons can visit guyanarestaurantweek.com for more information.