The CHWs graduated on Wednesday after undergoing six months of theoretical and clinical training.

The graduates were drawn from Regions Two, Three, Four, Five, Six and Ten. The government plans are to strengthen primary healthcare delivery in these regions. 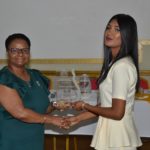 Minister of Public Health, Volda Lawrence hands over the award to the Valedictorian of the Community Health Worker batch, Schabana Harrichand. 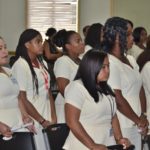 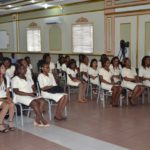 The training, which started on August 5, 2019, was facilitated by the Ministry’s Division of Health Sciences and Education. Housing, classes and preceptorship were based in the West Demerara- Essequibo Islands Region.

Minister of Public Health, Hon. Volda Lawrence, who addressed the graduates, said she is happy that they are now set to make a difference in the communities in which they will serve.

She noted that it is the intent of the Ministry of Public Health through this programme to equip CHWs with the requisite skills to function at their optimum in health facilities in respective communities.

“The Ministry also intends that these CHWs create linkages between residents and the health care facilities while improving the outcome of the health and well-being of those residing in your respective communities.”

Though the training programme existed since in the 90s, it has been revamped.

The minister also told the graduates that there are many opportunities available through the Ministry for them to upgrade their careers in public health.

She also urged them to commit to serving all people regardless of background and without favour.

Valedictorian, Schabana Harrichand from Tuschen, Region Three expressed her elation in returning to her community to serve as a community health worker.

She noted that the six-month training programme is one which required dedication and determination as the reward is yet to be recognized.

Harrichand encouraged her fellow graduates that it is not the end of the road and to stay the course which they have embarked upon.