Representing the first of its kind in the Demerara-Mahaica region the Kitty roundabout was open for commuters approximately two years ago. The project implemented under the Coalition government is described as an infrastructural masterpiece that has reduced traffic congestion within Georgetown.

In an interview with DPI, taxi driver Randolph Gill said the roundabouts should be constructed in other parts of the country wherever needed.  Commending the project, he noted, “The roundabout is one of the best things they ever did in the country to reduce the slowing up and the backing up of the traffic.” 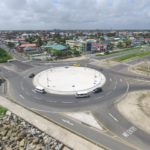 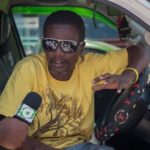 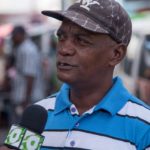 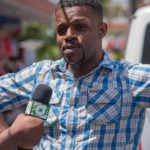 For Shane Pickering, a bus driver that plies the Stabroek to Plaisance route, the roundabout makes travel easier and less stressful than in former years. “I drive with the mentality that the traffic on the right has the right-of-way. So, I just approach the corner with caution and when I get the space, I just keep going left and it is a smooth flow for me,” Pickering explained.

With nearly 20 years of experience in the business, bus driver Alan Gittens said he appreciated the education campaign on the roundabout that was conducted by the Guyana Police Force.

“I think they have done enough in terms of educating the public because they used the media and they used it effectively,” Alan remarked. Concerning other road users that may incorrectly use the roundabout, Alan continued, “I do not think there is any excuse for anyone to say they don’t know about it.”

In addition to improving traffic flow, studies show that roundabouts also contribute to saving lives. According to an academic journal written by Rune Elvik titled “Road Safety Effects of Roundabouts: A meta-analysis”, roundabouts reduce fatal accidents by 60 percent and injury by accident by 35-45 percent.

The second roundabout under the Coalition Government was built near the Cheddi Jagan International Airport (CJIA) as part of the CJIA’s ongoing expansion project.