The 2016 Indigenous Affairs Month celebrations are aimed at recognising Amerindians’ contributions to the green economy, reflected in the theme “Our culture, Earth’s Future-save the environment, live the indigenous way”.

Minister of Indigenous Peoples’ Affairs Sydney Allicock underscored the reason for land titling for the country’s first people, stating that while many question the reason Amerindians are given land, it is important to note that, “giving indigenous rights, to lands were a guarantee that the forest which stores carbon and contributes to food security would continue to exist.”

Minister of Indigenous Peoples’ Affairs, Sydney Allicock and Minister within the Ministry, Valerie Garrido Lowe (center), along with members of the Indigenous Affairs Month Organising Committee pose for a group photo

Allicock added that the country’s first people preserve and protect the forest; they contribute to Guyana’s position among the top countries in the fight against global warming.

The Minister further noted that during the month-long celebrations, it is important for Amerindians to remember their roots, struggles and achievements. “We must always be proud of who we are, where we came from and all the significant contributions of our people to Guyana,” Minister Allicock said.

The celebrations will commence with an inter-faith service on Thursday, September 1, 2016 at the Umana Yana and will continue with the traditional, games, art exhibition, school lectures, educational school tours, Heritage village, sports, and food and craft exhibition, cultural extravaganza, and heritage dinner among other annual events.

Minister within the Ministry of Indigenous Peoples’ Affairs, Valerie Garrido-Lowe urged Guyanese to join in the celebrations and recognise the country’s first people. “As we celebrate Guyana’s Jubilee independence, the organising committee at the Ministry of Indigenous Peoples’ Affairs, headed by Anil Roberts, has planned numerous exciting activities for the month of September. We are asking all Guyanese to join us to celebrate portions of our culture,” Garrido-Lowe said. 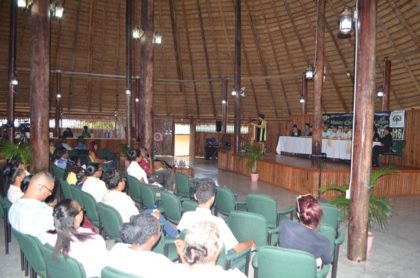 A section of the gathering at the Ministry of Indigenous Peoples’ Affairs’ Indigenous Affairs Month 2016 launch, at the Umana Yana

Valery Dorrick, organising committee member said that the food and craft exhibition will promote not only indigenous food and beverages, but other local foods. This is to cater for “those persons who are not so adventurous,” Dorrick said.