The Indigenous Heritage Month of activities continues with three days of sports, beginning tomorrow at the Everest Sports Ground, Georgetown. 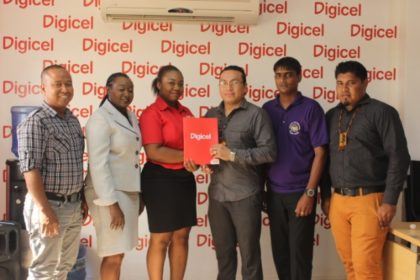 Digicel which has over the years sponsored the games today, donated close to $1M to the Ministry of Indigenous Peoples’ Affairs to offset costs.  Event Coordinator, Anil Roberts said that the Ministry is grateful for the continued support from the telecommunications company.

Digicel’s Marketing Executive, Luana Abrams said that the telecommunications company is pleased to be associated with the Indigenous Heritage sports. Abrams said that the company “hopes there will be a successful three days of sports and we will continue to support in any way that we can.”

Over 600 athletes from Regions One to Ten are expected to be participating in the heritage games. The first day of sports will kick- off with a number of sporting activities which include tug-of-war, tuma eating competition, fire lighting competition, archery, fire wood bursting competition, and swimming. The latter activity will be held at the National Aquatic Centre, Liliendaal.

On the second and third days, football, cricket and volleyball will be played. To gain entry to the games, adults are required to pay $200 and children under 12 years old are free.

Minister within the Ministry of Indigenous Peoples’ Affairs Valerie Garrido-Lowe and Director of Sports, Christopher Jones are expected to be in attendance for the games’ opening.

Indigenous Heritage Month is being celebrated under the theme “Our Culture, Earth’s Future – Save the Environment, Live the Indigenous Way” in keeping with the Government’s push for a green economy.