Georgetown, Guyana – (March 25, 2017) President David Granger, last evening, said that Linden must fulfill its mission as a capital town by driving the development of the Region through investments, infrastructure and information technology. The President made these comments at the opening ceremony of the Linden Trade and Investment Fair at the Egbert Benjamin Exhibition and Conference Centre, Linden, Upper Demerara- Berbice (Region Ten).

President Granger applauds as a student cuts the ribbon to ceremonially mark the opening of the Trade Fair. (from left) Mayor of Linden, Mr. Carwyn Holland, Minister of Business, Mr. Dominic Gaskin and Regional Chairman, Mr. Renis Morian look on

The three-day event is a collaborative effort of the Linden Chamber of Industry, Commerce and Development (LCICD) and the Linden Enterprise Network Incorporated (LEN) and is being hosted under the theme “Linden: The Gateway for Investment Opportunities; the Window to our Future Development”. This is the first year that the event is being hosted as a stand-alone event, having been hosted during the Linden Town Week Festivities in prior years, but collaborators made the decision to separate the events this year, seeing the need to emphasise the development of small business enterprises in the Region.

Speaking on Linden’s potential for development, the President urged residents to see themselves are divers of the development of the whole Region through three critical channels: investment, infrastructure and information technology. The latter, he said, serves as the window of business opportunities. “Information technology is the vehicle for accessing, communicating and not only for storing [information] but for finding out what the market needs and you can direct your producers to that market,” the President said.

With regard to investments, the Head of State said that Linden needs increased economic activity to create jobs, generate wealth and reduce poverty and noted that investment can spur the that movement in the economy.  In the area of infrastructure, the President said that the inadequacies of infrastructure are impediments to increasing production. “I see today as an unfolding of the mind, I see an unfolding of great opportunities for this region; an understanding that a fresh attitude and a new approach are needed to business,” he said.

The President said that Region Ten is strategically located as it occupies 12 percent of the country’s land space and borders seven other regions. As such, he said, Linden, as part of Region Ten, must leverage its strategic location to attract greater investment and boost business development. “Linden must become an example of the role, which capital towns must play in the development of regions. Linden must drive the economic development of this sprawling and promising Region,” the President said.

The Head of State also highlighted several other advantages of the Region, including commercial banks, fire and police stations, National Insurance Scheme (NIS) office and other utilities and services. He added, “The Region is rich in agricultural lands… Your agricultural lands can contribute to food security… Your forests produce timber, your flora, your waterways are habitats for wildlife and tourists are prepared to come to see that wildlife. You have the potential for ecotourism. Guyana is becoming a ‘Green’ State; a state where 85 percent of its land space is covered with rainforests. It is part of the Guiana Shield; the lungs of the earth… So do not ignore your eco-tourism potential.”

The President said that the Region can also create a strong industrial base, having been the heartland of bauxite mining for a century and one which has attracted and trained engineers, electricians, geochemists, geologists, machinists, mechanics, surveyors, technicians and welders among a range of skilled personnel. He said that while some of these persons have migrated, he is certain that they would return to Guyana to invest in Linden with the right incentives. “Initiatives such as the Linden Enterprise Network have the potential to unlock the latent inventiveness of its people. Linden must fulfil its mission as a capital town by becoming a commercial and services centre.,” he said.

Applauding the collaboration between the LCICD and LEN, President Granger said the event emphasises the importance of partnerships aimed at invigorating investment, activating business and stimulating economic development. “There has to be change. We cannot expect to become rich by repeating the practices, which have kept us poor and hoping that things will improve… I hope this event becomes an annual event so that people can focus on the seriousness of economic development… This is a declaration of the intention to put economic development as a top priority” the President said.

Chairman of LEN, Mr. Klensil Granville, during brief remarks, thanked President David Granger for making LEN possible. “When [Linden] thought there was no way out, [the President] came and made a way for us with the help of God and we thank him today for pooling financial resources into LEN so that we can, in turn, give it out to the community and they can further move their businesses forward… We are moving forward as a people and we will stand and we will move forward strong economically,” he said.

President of the LCICD, Mr. Kevin DeJonge said that the Trade Fair will focus on the development of local producers and would encourage the producers to not only showcase their products and services but to make them better. “This is a momentous occasion. One that makes the realisation of the first step of a vision by the Chamber of Commerce; a vision that sees the major stakeholders in our region putting aside differences and coming together to achieve that common goal of economic stability in our region,” he said.

Mayor of Linden, Mr. Carwyn Holland said that investment is an essential ingredient in advancing the all-inclusive development that the people of Linden envision. “Small businesses begin with big dreams so I challenge you, therefore, to think big, aspire big and envision an economy built by and through economically conservative zeal,” he said.

Regional Chairman, Mr. Renis Morian said that the hosting of this event represents a powerful expression of confidence in the people of Region 10 by the coordinators. He said that he looks forward to such events creating a positive impact in the Region.  “We need to move from just having products but these products must have an economic and social product in Region Ten. I look forward to these agencies working hand in hand…so that we can move from cottage industries to large industries,” he said.

The Trade Fair provided the opportunity for several small business owners from the Region and other parts of the country to showcase their products and services. Many of the exhibitors felt that the event is one of the key ventures to ensure that their products are promoted.

Mr. Peter DeClou from the community of Coomacka had on display a variety or art and craft including hand-made straw hats, wooden sculptures and framed pictures with poetry. He is also the Vice President of the Coomacka Agricultural and Craft Association and said that many of the items on display were also the work of other members of the community. He expressed the wish that more such events would be held in Linden. “We don’t just want to do this once a year. So from this event it would be good if we can have other similar ones so that we can earn a living from this work,” he said.

Ms. Caroline David was there to represent her family business Chanzar Enterprise, which produces spices, flour, pepper, seasonings and other items. She said that the family thought that this event would be ideal for the business to expand its customer base. “We are sensitising the public that they can buy local; so that we can show people that we can produce things in Linden and we can also help to create employment for the youths,” she said.

Ms. Coreena Richmond, who is a resident of Linden, is a housewife but also earns an income by sewing school uniforms for children in Linden. In addition, she makes other items like embroidered tablecloths and blankets. She admitted that she hoped to extend her customer base by participating in the Trade Fair.  “I am hoping that people would recognise that I have skills so that they can contact me for such services and I would be able to contribute to my home in a bigger way… I also hope that people will learn what people in Linden can do,” she said.

Following the opening ceremony, the President performed the ceremonial cutting of the ribbon to declare the Trade Fair open after which he conducted a walk through and interacted with several of the small business owners, who had their products and services on display. Services products and services ranged from arts and craft, to beverages, literature, alternative energy appliances and equipment, spices, and value added products including jams and jellies, confectionary, peanut butter, seasonings and other products. Minister of Business, Mr. Dominic Gaskin was also present at the ceremony along with other dignitaries from the town of Linden.

The President addresses the people of Linden during the opening ceremony 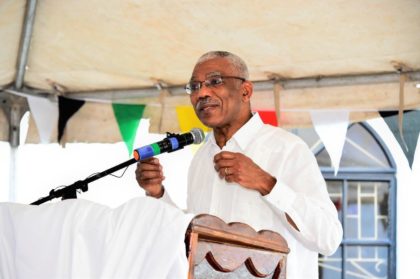 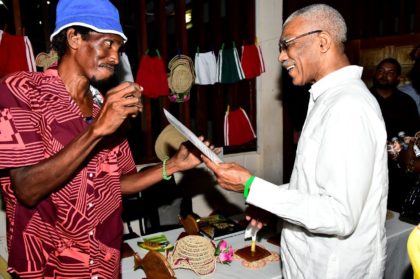 he President is presented with a token from Mr. Peter DeClou who exhibited his craft items at the event 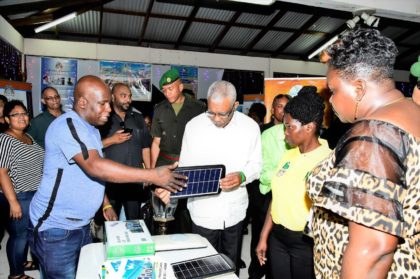 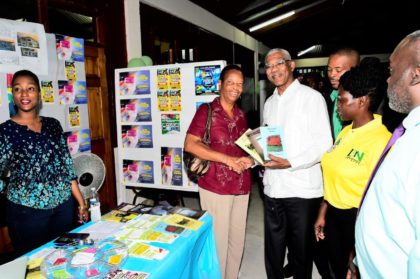 The President poses with an exhibitor at the Trade Fair