—“A new covenant will be crafted to ensure Iwokrama’s survival and success, in perpetuity” -President Granger

His Excellency President Granger has warned that the spectacles of various environmental events are nothing if not apocalyptic. “The environment must be preserved and protected,” he sounded.

He reminded, “of the Atlantic Ocean’s waters rushing unimpeded onto the rice paddies at Dantzig; of the stelling at Parika, in full flood; of Omai’s cavernous, mined-out craters or Cuyuni’s turbid waters contaminated with gold-mining effluent; of Rupununi’s savannah fires and Shell Beach’s disappearing mangroves.” 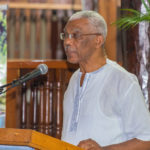 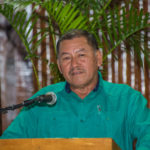 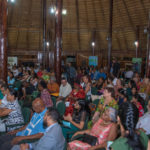 The Head of State emphasised, “The environment must be preserved and protected for the benefit of our people, the planet and present and future generations. We have much to lose if we are careless with the priceless, precious and peerless resource. Guyana’s biodiversity is more precious than petroleum. It must be preserved and protected to prevent further damage to the physical environment, to mitigate the effects of climate change and to provide support and services, necessary for life.”

The protection of our biodiversity, the President noted can help to reduce, and even reverse, the adverse effects of climate change, “The country’s landscape – comprising its coastlands, grasslands, highlands, islands, lakes, rainforests, rivers, waterfalls and wetlands – paint a picture of a pristine paradise….Their waters and forests abound with animal and plant life, including more than 8,000 plant species, 467 fish species, 814 bird species, 130 amphibians, 179 reptiles and 225 mammals.”

Linking Iwokrama to his visionary Green State Development Strategy: Vision 2040 – the country’s roadmap towards transitioning towards a ‘green state’’, he said, “The ‘Strategy’ recognises that our country is about to become a petroleum-producing state. This will be the most transformative economic development in the country’s history one that will boost economic growth and provide increased resources for national development.”

President Granger explained that environmental conservation and protection are key elements of this agenda,

“The ‘green state’ will preserve and extend the country’s Protected Areas System which includes Iwokrama and the Konashen Protected Area – the latter encompassing some 7,000 km2 – and which has been accredited to the Queen’s Commonwealth Canopy.”

The Head of State noted that Guyana responded promptly to the Declaration by demonstrating how a ‘small’ state could make a ‘big’ gift to the world.

“Guyana committed a forested area of 371,000 hectares as a model for conservation and sustainable forest management.  It was an ambitious and audacious initiative by a small state in response to a global threat. The Iwokrama covenant was sealed on 9 November 1995 with the signing of the Agreement between the Government of the Co-operative Republic of Guyana and the Commonwealth Secretariat for the establishment of the Iwokrama International Centre for Rain Forest Conservation and Development.”

The President advised that Iwokrama must change to survive. “It can no longer subsist under the old covenant which played a pivotal role over the past 30 years. The Centre is part of the national patrimony and Guyanese, first and foremost, must bear the greatest responsibility for the Centre’s future development, without cutting the umbilical cord of international cooperation.”

He warned that Iwokrama will not survive unless it adapts to the challenges imposed by climate change.

“Change is taking place at a rapid pace and is improving our knowledge of the environment. Institutions which do not prepare for the continuous changes in the environment will become irrelevant. Iwokrama will not be allowed to become a lifeless monument or museum or, worse, a timber grant or gold mine. Iwokrama will not be allowed to become an environmental ‘theme park’ or the ‘playground’ for celebrities.”

According to President Granger, a new covenant, functional rather than ornamental, will be crafted to ensure Iwokrama’s survival and success, in perpetuity.

“Iwokrama, under the new covenant, will be about education rather than entertainment and research rather than recreation. The Centre must become a schoolhouse for students aiming to study the sciences – biology, botany and zoology.”

He iterated his government’s intention, with international partners’ support, to make Iwokrama into a world-class institute for biodiversity research, “Iwokrama will be the home of an International Institute for Biodiversity to support its educational efforts. The Institute will allow students and researchers from the Continent, the Caribbean and the rest of the world to come to Iwokrama to study its biodiversity and to increase knowledge and understanding of our vital ecosystems. Iwokrama is part of our patrimony. It is central and integral to Guyana’s green development strategy.  It will reinforce its emphasis by being a Centre of excellence in education in biodiversity.”

In closing President Granger stated that Guyana has been a trailblazer in global environmental protection. He congratulated stakeholders, pledging the Coalition Government’s continued support noting that Iwokrama has demonstrated how small states can punch above their weight in offering solutions to global environmental problems, “A new era is about to dawn for Iwokrama.  It will be developed into a biodiversity conservatory and a schoolhouse for studying ecosystem services.”

Calling for all stakeholders to support the IIC’s efforts, Vice President and Minister of Indigenous Peoples’ Affairs Sydney Allicock said, “We have to look at it, together, to utilise the resources we have, to bring greater benefits to all humanity.”

The contributions of Exxon/Mobil some $120Million thus far to the IIC’ science programme, were highlighted and a legal handbook, drafted by Environmental Lawyer and current Bar Association President Teni Housty, launched.

The IIC is an international not-for-profit organisation, governed by an International Board of Trustees and managed by a professional team of around seventy permanent staff in Georgetown and at the Iwokrama River Lodge and Research Centre at Kurupukari. The IIC’s Patron is HRH The Prince of Wales. The Iwokrama forest and its research centre are unique, providing a dedicated site in which to test the concept of a truly sustainable forest – where conservation, environmental balance and economic use can be mutually reinforcing.