Journey to Cursima – The first visit of a government minister

Travelling through Guyana’s jungle is never easy so we rely on guides. Usually, they are inhabitants of these areas. But, what happens when the guide gets lost? 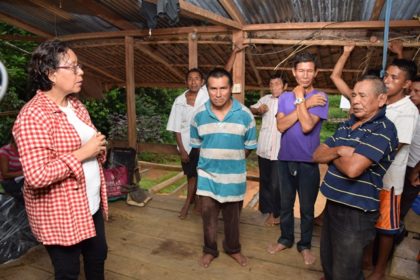 A short while back, Minister within the Ministry of Indigenous Peoples’ Affairs, Valerie Garrido-Lowe, set out to visit Cursima, a small satellite community in Region One. During the 2015 Regional and General Elections, the minister had heard about the community and had promised to visit. She was intent on keeping her promise. Her intention was to make sure that this remote village receives its share of the national pie.

Located many miles from the closest village, Whitewater, Cursima is home to about eight families who speak only Warrau, their native language.

To get to the village, the minister and team were being guided by Toshao of Whitewater, Elroy Antonio, the one person they knew who had visited the village before.

Setting out from Whitewater by truck, the team would travel overland through dense forest. Tossed and tumbled every which way, they endured the hour long ride.

The next stage of the journey would see the coast landers testing their legs as they were called on to hike up a mountain. Hiking was not on the agenda for the team when they left Georgetown. But, if they intended to get to their desired destination, then it just had to get done.

Just when they were about to take a rest, the rain came. They say rain in the jungle is not like rain on the coast. It is colder. With no shelter available, the hardy team continued to trudge on.

Whether it was a sixth sense or some tree that looked like she had passed it before, Minister Lowe 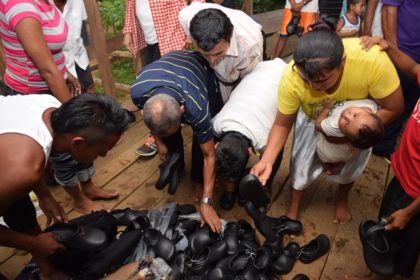 Some of the shoes Minister within the Ministry of Indigenous Peoples’ Affairs Valarie Garrido-Lowe distributed to the residents.

began to feel that something was not quite right. In a jungle, one is never quite sure of these things.

On enquiring how much further they would have to go to reach their destination, the team was horrified to hear that they were lost. Lost?

For almost two hours they had been walking aimlessly, trying to find their way back on the correct path as the rain poured. After much praying and hoping and getting quite agitated, the guide was able to lead them to a small clearing along the bank of the creek they were looking for. There they met a few people from whom they were able to borrow a boat for the journey up the creek and into Cursima.

Minister Lowe and her team journeyed up the shallow creek, through the rain with a sigh of relief. Huddled under meager coverings and not knowing where they were headed, the team would face an even greater challenge. A huge tree had fallen across the creek blocking their path. Should they turn back at this point? Not an option for Minister Lowe!

Sitting in their boat, contemplating possible options in the absence of a chainsaw, the rest of the team was just about to protest when help arrived. A group of people from the village had come up the creek to meet them. Bags and people were transferred over the tree, to the other boat, and the journey continued. It was a damp but excited team that reached Cursima. Probably feeling like Columbus, the coast landers were humbled by the warmth of the welcome they received.

According to the village elders, it was the first time, since the establishment of the village some 70 years ago, that a government official would visit their village.

For Minister Lowe, it was not just about reaching a village. She learnt that the children and adults had never attended school. Their babies were born at home and ailments were treated with traditional medicines. Electricity, potable water, telephones, gas stoves were unheard of. Shoes were a scarcity. All the things usually taken for granted by the visiting team were either luxuries or just simply did not exist for the people of Cursima. They exist on what they hunt and catch in the creek. 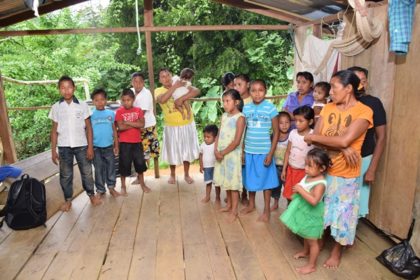 With that, the Minister pledged to give the indigenous people living there the opportunity to learn the English language. What got the Minister excited was the response from the villagers to the suggestion of having English taught in their village.

“I want to go get crayons and pencils and books, all sorts of things. I think we will have fun teaching English as a second language to these Warrau citizens of ours. … We have a challenge there and we need to look into it as quickly as we can just to make sure that we have all our citizens on our radar so that we know how we are going to help them to enjoy this good life that we want everyone to enjoy,”  Minister Lowe told GINA.

The visit to the village, Minister Lowe said was due to a promise she made to herself to reach out to all the Indigenous people and provide assistance in whatever way through the Ministry of Indigenous Peoples’ Affairs. On her visit, Minister Lowe distributed food supplies, shoes and clothing to the residents of Cursma.

Getting to village is only one half of the journey, the other half is getting back. Now that the place was dark, one could only imagine what went through the minds of the Minister and her team after stumbling upon so many obstacles on their journey to the village.

However, the residents of Cursima offered to lend assistance which the Minister and her team quickly accepted. With the help of the villagers, the journey was much shorter and much more pleasant, without rain.