The performance by the Grenadian track and field star ensured that the Aliann Pompey Invitational, premier international track and field competition held at the Leonora Track and Field Centre, lived up to expectations.

Despite the inclement weather, James said that he was happy with the way he finished the race. “We had some rain earlier so that kind of affected preparations but I am good” he said.

George who finished in third position said it was a great experience going up against Kirani James. “I came out here, I gave it what I had and it was good” George stated. 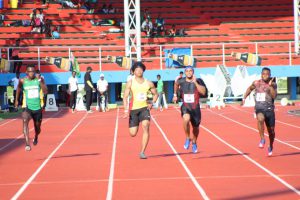 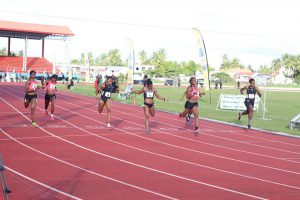 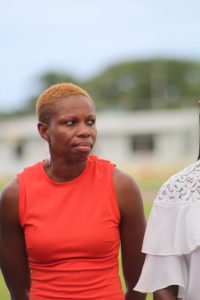 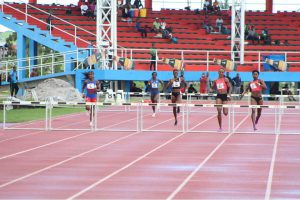 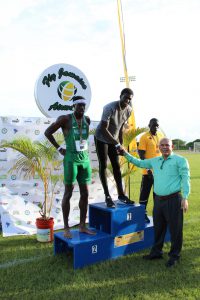 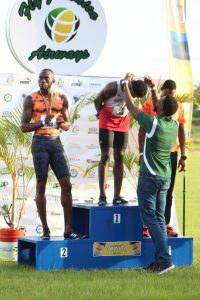 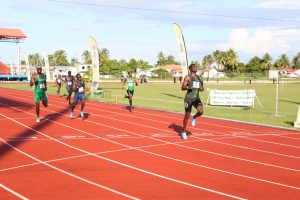 The triple jump event was the second most anticipated event which featured Guyana’s Commonwealth Gold medalist Troy Doris. However, Doris who just came off an injury failed to make the podium after finishing in fourth position.

The 100 metres race was also full of excitement. Local boy Emanuel Archibald clocked 10.29 seconds to win the event ahead of Trinidad and Tobago’s Kyle Greaux who finished second with 10.39 seconds and Yancarlos Martinez of the Dominican Republic in third with 10.43 seconds. Archibald is currently pursuing a Bachelor’s Degree in Sociology via scholarship by the National Sports Commission at the University of the West Indies (UWI) Mona Campus.

Minister of Social Cohesion Dr. George Norton noted his satisfaction with the performance by the local athletes. “This obviously is the start and we are hoping that with this alone, we would create a kind of an environment that is similar to that of an international meet and it will prepare our athletes if they have to perform abroad” the Minister stated.

Director of Sport Christopher Jones, Minister within the Ministry of Social Protection Keith Scott, President of the Athletics Association of Guyana (AAG), Aubrey Hutson among other senior officials were present at the event. This year’s Aliann Pompey Invitation feature 25 different countries and over 100 athletes and 17 track and field events.