─NDMA to set up service via LTE

Twenty-three-year-old, Brenrick Francis was excited to hear the news of the establishment of free internet service in his home village. This expected to happen as early as the first week in October.

The announcement was by the Minister of Public Telecommunications, Hon. Catherine Hughes and Chairman of the National Data Management Authority (NDMA) Floyd Levi during a community meeting today. 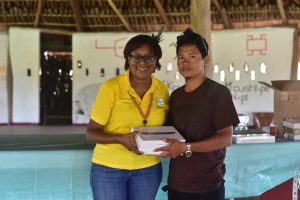 Minister Catherine Hughes hands over a tablet to Brenrick Francis, a youth leader in the Kumu Village 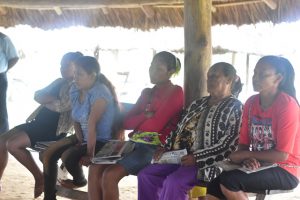 Some of the residents of Kumu at the community meeting

Francis, a vibrant young leader in the community, said this will significantly enhance the functions of the village council, schools as students will now be able to access information to assist with their assignments and will serve a means of promoting the village tourism product.  Describing it as a ‘godsend’, he also noted that the establishment of internet access in the community will also help in harnessing the youth population in terms of learning a skill in order to meaningfully contribute to their village.

“There is always a saying, ‘God doesn’t come but he sends’ and I have lived to see that is true… I travel every day to Lethem to use the internet. Also, with an internet hub, we can do so many things. For example, the village council would have to send reports to Georgetown, they can now simply email it… we really need the internet”

Francis has a diploma in Computer Science and will be one of the key persons working along with the Telecommunication’s Ministry to ensure that residents in the village are computer literate and knowledgeable of how they can access the required information from the internet.

Chairperson of the National Data Management Authority, Floyd Levi explained that in remote hinterland areas, the ministry has established more than 60 satellite dishes which will be the source provider of the internet service. However, a few villages outside of Lethem will receive the service from another source.

“There is a different technology, there is a tower in Lethem. That tower we will be beaming the signals to Quarrie, Kumu, Moco-Moco, Hiawa, and Nappi. That special technology is Long Term Evolution (LTE) and the team perform the installation should begin their work Monday (September 30).” Levi explained.

Minister Hughes explained to the Kumu residents the many ways the internet service will benefit them in a medium- and long-term period. She spoke of smart classrooms for students, which will ensure they access teaching sessions taking place in Georgetown. Also, she shone a light on how telemedicine can be effective in villages such as Kumu as it will save villagers expending large sums of money to travel to Georgetown to meet with a medical specialist.

She was pleased to hear that the village is interested in forging ahead with expanding their village’s tourism potential. She noted that the internet service is a small but most significant ingredient to realizing this vision.

“Tourism can make this whole village open up… Imagine, if you have a website on Kumu village you would be able to introduce Kumu to the world. There is where people who think of coming to Lethem or coming to Guyana would go to know of the beautiful Kumu Falls…” the Telecommunications Minister said.

Moreover, the village can benefit tremendously through the acquisition of an Information and Communications Technology Hub which will also be established in the village.

The Ministry has even committed to rehabilitating and equipping a building which was constructed under the previous administration to be used as an ICT hub. “it is furnished but there are no computers. I have a diploma in computer science and would like to work with the people in my community,” Francis said.

Priority will be given to the health and education sectors in the village; therefore, these facilities would be first to receive the service while another connection will be located at the village’s main benab.

During the community meeting, Minister Hughes and her team handed over to several electronic tablets to residents. Villagers were happy with the minister’s visit and took the opportunity to highlight concerns which they were assured would be addressed.

The community of Kumu is approximately a 20 – 30-minute drive from the town of Lethem.