This was reported to the media by ExxonMobil’s Country Manager, Jeff Simons, during a media luncheon, organised by the oil company, at Cara Lodge, today. 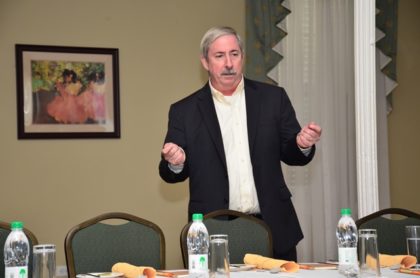 ExxonMobil’s Country Manager, Jeff Simons, addressing the media at an engagement at the Cara Lodge

The event is part of a series of engagement the company initiated, beginning in July, with local stakeholders, including the government and commercial interests, aimed at updating them on the progress made, since the Lisa 1 well discovery was announced in May 2015.

Following the Liza 1 well, oil discovery, ExxonMobil, commenced the drilling of the Liza 2. This second well was dug to allow the oil company to confirm, the results of Liza 1, but in a different location. The Liza 2, was drilled approximately two miles (3.3 km) from the Liza 1.

Simons today reported that the tests on the Liza 2 were completed in July, and further the data has given the oil company the confidence to go forward with the Liza development, including embarking on the drilling of a third well (the Liza 3) and advancing engineering work with leading contractors on offshore development. This includes developing a new Floating Production, Storage and Offloading (FPSO) oil tanker to work at the Stabroek Block. An FPSO is a floating vessel used by the offshore oil and gas industry for the production and processing of hydrocarbons, and for the storage of oil.

Simons explained that the Liza 3 will be dug on the far northern corner of the Liza development field.  The other earlier wells were more to the south of the Stabroek block. 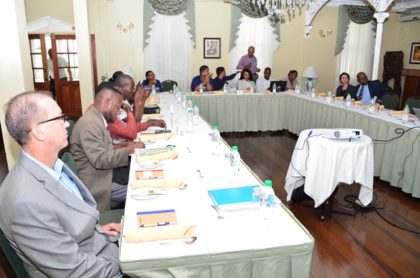 The ExxonMobil Country Manager explained that this third well will “demonstrate competency in a larger proportion of the Stabroek Block field” as well as give the oil company more information, as to the exact size of the oil discovery.

At present, ExxonMobil, has being averaging the oil discovery, to be about 800 million to more than 1.4 billion barrels of oil.

Further, Simons explained that the information, from the Liza 3 could possibly drive a second phase of the Liza Development. Exxon is set to begin drilling the Lisa 3 in September.

Regarding the FPSO, Simons explained that the result of the first two wells support the beginning of engineering work towards this effort. The ExxonMobil Country Manager explained that FPSO will have facilities for oil and gas processing, gas injection, and future gas exportation facilities.

Simons explained that Exxon is currently in pre-front end engineering and design aspects for this project, and that the oil company will continue engineering for this Phase 1 project in 2017.

Simons however warned that the FPSO conversion will require about three years from contract award before it can be installed offshore Guyana.

ExxonMobil is expected to begin full oil production by 2020.