Guyana’s Shotakan Karate Club is feeling confident ahead of its participation in the International Karate Daigaku (IKD) World Cup in Barbados.

During an interview with the Department of Public Information(DPI), Senior Instructor and fourth Dan Blackbelt holder, Roger Peroun, said that a 30-member team is preparing for the contest slated for August 16 to 19. This will also be the third time that Peroune will be participating in the competition. 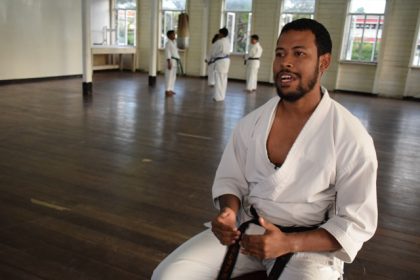 “So, it is myself, Sensei Amir and this one other person, another coach, Beaton. He is in charge of the fighting, I am in charge of the forms, the Kata as I mentioned, and we are currently training every week day and Sunday, soon we will be adding Saturday,” Peroune stated.

According to Peroune, team members are “fighting fit” and he is confident that the team will excel since there has been noticeable improvement among the athletes. This is being attributed to the continuous training that the participating athletes are currently undergoing.

Peroune explained that “I have been pushing the team a bit more. I am trying to get them bodily strong and then technically correct. So, the periodisation of their training is going pretty well, I think we will come back pretty successful. This is a strong team going out.”

At the last IKD World Cup tournament held in Canada in 2015, Guyana placed second overall, with a medal count of 84 which included, gold, silver and bronze.

The IKD World Cup is held every three years and provides an opportunity for members around the world to compete against each other and simultaneously improve fellowship. Over 400 competitors from across the globe including Canada, United States, South America, South Africa, Philippines and England are participating in the highly tournament.

The IKD was founded in 2011 and focuses on traditional Shotokan Karate with an emphasis on understanding why we do karate the way we do, and how to improve techniques through scientific means. A major goal of the IKD is to help young people throughout the world by guiding them and therefore breaking the cycle of violence through the discipline of karate.